Forward Guidance: Canada’s Labour Market Recovery to Take Another Step Back in May

Next week’s Canadian labour market report will show yet another step back in the employment recovery with employment expected to fall by 75K in May. Job losses will be concentrated in the hospitality and retail sectors due to the third wave of virus spread and containment measures. We look for the unemployment rate to inch higher to 8.4%. May job losses will build on April’s 207k drop to retrace half of the gains in February and March during the lull between the second and third waves. Canadian GDP, also released next week, is foreast to show a strong increase in March output with a sizeable pullback (we expect by about half a percent) expected in the preliminary estimate for April. That expected decline, which would be the first in a year, reflects both a tightening in COVID restrictions as well as weaker manufacturing activity with motor vehicle production continuing to be disrupted by supply chain bottlenecks.

Despite the weak near term backdrop, government supports remain in place to help bridge the gap until the broader economy can begin to reopen more significantly. Vaccination rates have continued to rise and provinces have announced, and in some cases already begun, easing restrictions. A surge in activity in the United States, where restrictions have been lifted more quickly, illustrates how rapidly activity can bounce back in COVID-sensitive sectors like airline traffic and the hospitality sector. 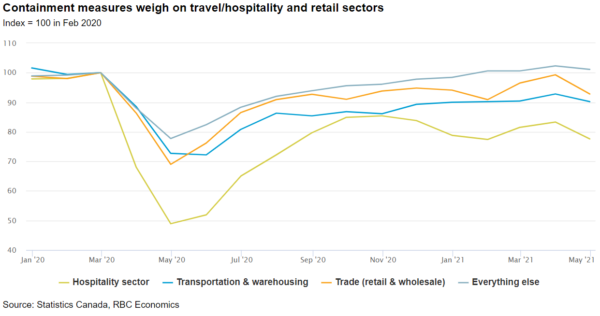 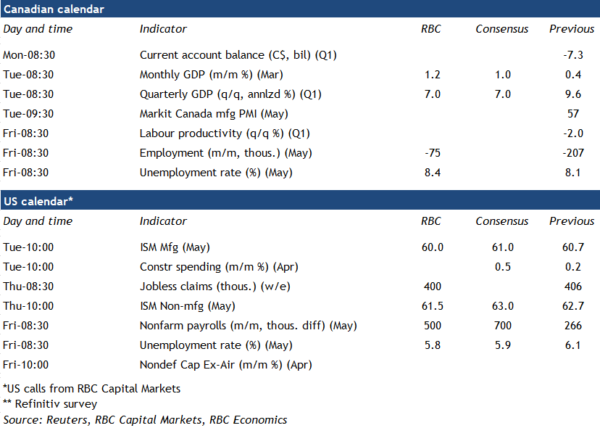