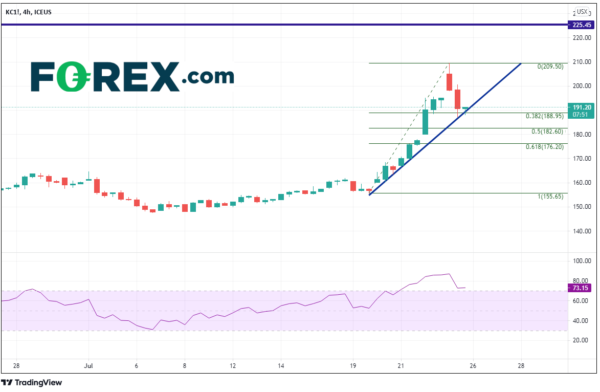 The European Central Bank meeting on Thursday was basically a rehash of the Strategic Review:  No change in monetary policy, no change in PEPP, and a statement wording change to reflect a “symmetrical 2%” rather than “Close to, but below 2%” This week, central bank focus will be on the FOMC meeting on Wednesday.  Will it be a rehash of Fed Chairman Powell’s semi-annual testimony to Congress or can hawkish members convince him that there has been “further substantial progress” in the labor market to begin tapering soon?  In addition, earnings will be front and center with week with tech giants FB, AAPL, MSFT, AMZN, and GOOGL reporting.  Guidance will be watched to see if companies believe growth has peaked.  Markets will also get their first look at Q2 GDP and the Fed’s favorite measure of inflation, Core PCE!

The focus of the ECB meeting wasn’t on Monetary Policy.  Expectations were low for any changes. Rather, the focus was on how the statement would be changed to reflect the results of the Strategic Review, which notably changed inflation guidance from “below or close to 2%” to a “symmetrical 2%”.  The most important change to the wording noted members see inflation at 2% before its projection horizon and durably for the rest of the projected time horizon.  They expect inflation to stabilize at 2% over the medium term and that some of the inflation will be transitory.  In a nutshell, inflation can “run hot” (just as with the US Federal Reserve).  Most notably, Christine Lagarde mentioned in the press conference that the ECB won’t raise interest rates while inflation is below 2%.  The Eurozone reports CPI this week and expectations are for 2%.  Last month’s reading was 1.9%.

This week,  the US FOMC will get its turn in the spotlight.  The focus will be on when the committee will communicate to the markets that tapering is on its way.  Fed Chairman Powell has consistently said that markets will know well in advance before tapering begins.  In his latest testimony, Powell indicated that there has not been “further substantial progress” in the labor market to warrant tapering. In March, he indicated that there would need to be a string of months of good data.  Therefore, although June’s Non-Farm Payroll print was +850,000, May’s revised print was +583,000 (weaker than estimated) and April’s print was only +266,000 (much weaker than estimated).  Also, last week’s Initial Jobless Claims was 419,000 vs 340,000 expected, the highest print since May 16th.  In addition, Chairman Powell seemed to be very adamant that a majority of current inflation is transitory, even though headline CPI is at 5.4% YoY.  This week the US will release what many consider to be the Fed’s favorite measure of inflation, Core PCE (although not until Friday, after the FOMC meeting.)  Current expectations are for 3.7% YoY vs 3.4% in May.   Traders will be closely monitoring the meeting for any clues as to when the Fed may begin tapering.

This is a HUGE week for earnings, as FAANGs (minus Netflix), Tesla and Microsoft will be reporting, just to name a few.  Not only will traders be watching the headline releases, such as EPS and Revenue, but they will also be watching guidance.  Do firms believe that current growth has peaked?  Netflix, Twitter and Snap were released last week. NFLX missed, while Twitter and Snap were strong beats.  Markets may use last week’s earnings as a guide for earnings this week.  We may also see an IPO from Robinhood at the end of the week. Could that signal the top in stock markets just as the Coinbase IPO signaled the top in Bitcoin?

Also, it should be noted that US President Joe Biden nominated Jonathan Kanter to lead the Department of Justice Antitrust Division.  Kanter is known to be a tech critic and will be closely monitoring these large tech firms for anti-competitive mergers and monopolies.

Below are a few of the more notable companies that will be reporting this week:

Month-end means month-end data.  Not only will we have the FOMC meeting this week, but there are a host of other economic data points that will be watched.  We’ll get our first look at Q2 GDP from the US, Germany, and the Eurozone, German Unemployment Change, Australian CPI and US Core PCE.  Other important economic releases are as follows: Does your trading need a boost? How about some Coffee?  Coffee futures have been hot lately!  After slowly grinding higher with other commodities during the course of this year, Coffee futures closed Monday last week at 155.65.  On Tuesday, they gapped higher to open at 164.35 and haven’t looked back.  Friday’s high for the front month coffee futures contract was 209.50, up as much as 21% since Monday’s close.  Price currently has pulled back to trendline support near 190.00.  Support below the trendline is at the 50% retracement level of the move near 183.60, then the gap-fill at 177.90,  just above the 61.8% Fibonacci retracement level from the previously mentioned lows to highs, at 176.20.  Resistance is at Friday’s highs of 209.50.  Above there, horizontal resistance crosses at 225.45, which is the high from October 2014!

With roughly 40% of the S&P 500 reporting this week, along with many tech firms not in the large index, stock indices may see some volatility this week.  Throw in an FOMC meeting, important economic data, and end of month flows, and it could make for an extra volatile week.

Have a great weekend and enjoy watching the Olympic games!