The Weekly Bottom Line: Now and Then

The first week of August ushered in plenty of first-tier economic data, but today’s employment report takes the cake. The economy added an impressive 943k jobs in July. This is slightly better than in June, and the strongest gain so far this year (Chart 1). While the employment recovery lags the recovery in economic output, July’s healthy gain, combined with upward revisions to May and June have helped shrink the gap in employment to just 3.7% relative to the pre-pandemic level.

Once again, the leisure and hospitality sector led the way on job gains, as it continued to make up for lost ground. Of the 380k positions added in the sector last month, the vast majority were in bars and restaurants (253k). The educational sector also had a strong showing, although this was partly the result of pandemic-related volatility (i.e. unseasonal school closures and re-openings), which helped prop up local government education payrolls. Gains were broad-based across most other industries. The good news didn’t stop there. Rapid overall employment growth dragged down the jobless rate to 5.4% from 5.9% in June.

Most other indicators in the week carried forward the positive narrative, with the vehicle sales report the only major fly in the ointment. Auto sales fell by 4.2% to 14.8 million (seasonally adjusted at annual rate) in July, marking the third consecutive monthly decline. Instead of demand, however, it is lean inventories – the result of supply chain disruptions – that are the primary culprit behind the downward trend. Constrained production from supply chain issues is acting as a drag on the rest of the economy. But as these disruptions are smoothed over, the need to rebuild inventories should support production in the longer term.

Tilting over to the ISM indexes, both remained well above the 50-point threshold in July, pointing to continued expansion through mid-summer, even as the manufacturing index ticked down a notch (-1.1 to 59.5). The ISM services index, which encompasses a larger part of the economy, reached a new record in July, rising four points to 64.1.

The manufacturing side of the economy had a better run in the earlier phases of the recovery as consumption shifted toward goods. With most COVID-related restrictions being lifted through the spring and early summer, the services side of the economy is primed to carry the torch as spending is reoriented toward services. The pandemic, however, may throw the recovery cycle yet another curveball.

New COVID cases are up sharply from only a few weeks ago, with the more contagious Delta variant now making up more than 93% of all new infections (Chart 2). Hospitalizations are also rising, with the number of patients currently receiving care near same level as at this time last year (around 50k). Thanks to more than 70% of those 18+ having already received at least one vaccine dose, vaccines are expected to play an important role in limiting hospitalizations in the current wave. Fortunately, the pace of jabs is also trending higher recently in hard-hit regions. As a result, future bouts of pandemic-related volatility should prove less disruptive to the economy than in the past. 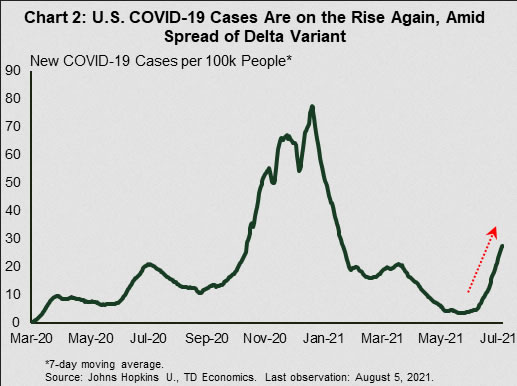 Canada – Now and Then

Today’s Labour Force Survey report revealed that job growth posted a solid (even if below expected) gain in July. Employment increased by 94k positions last month, leaving it only 1.3% below its pre-pandemic level. However, details in the report were somewhat mixed. On the one hand, gains were concentrated in full-time employment and hours worked climbed by 1.3% m/m. On the other, there was weaker-than-expected growth in high touch industries due to ongoing capacity constraints and travel restrictions.

Of course, a sturdy July jobs print is not that surprising, given re-openings taking place across the country. The healthy gain in hours worked also suggests that third quarter GDP growth began on a very solid footing. We had a pretty good idea that the economy would enjoy firm growth during the summer, but with new cases trending higher, risks to the outlook are also on the rise. What can we expect after a summer of fun?

Looking at countries with similar full-dose vaccination rates as Canada shows a surge in COVID cases from late June to late July (although they are on a downtrend since then). Yet, restrictions (measured by stringency indices) eased up a touch when cases were rapidly climbing (Chart 1) as hospitalization rates remained low due to a healthy vaccine uptake in these countries. The message is that the rise of the Delta variant didn’t put the brakes on economic activity to nearly the same extent as in other waves. 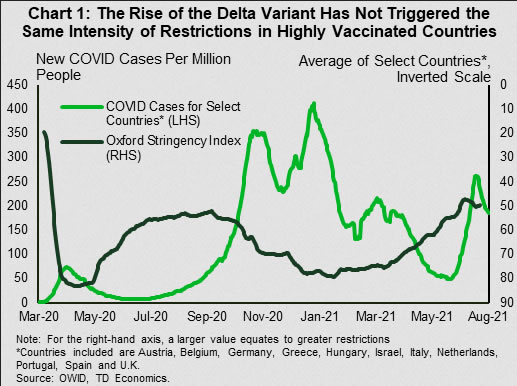 A similar story is emerging in Canada. Indeed, B.C. is applying a lighter touch to the latest round of restrictions triggered in response to an outbreak. This week, the Quebec government announced that vaccine passports will be implemented soon, as a measure to mitigate the potential spread of the virus. Manitoba, meanwhile, is set to fully ease restrictions in several sectors on August 7th and noted this week that recommendations and guidance would play an increasingly significant role, rather than restrictions. In Ontario, the government anticipates maintaining relatively few restrictions once the Province exits its “Roadmap” re-opening strategy. The view now seems to be that if COVID-19 is endemic, Canadians will have to adjust. And, more drastic measures, such as lockdowns, could be a thing of the past.

Re-opening plans could stall due to the Delta variant. The potential for further mutations of the virus is also a major risk, but not the only one. The recovery continues to be held back by challenges on the supply-side. Semi-conductor shortages are the posterchild for this and continue to plague parts of the economy. This week, we received international trade data for June, and although exports of motor vehicles and parts ticked higher, they remained over 20% below pre-pandemic levels (Chart 2). In July, manufacturers also pointed to near-record backlogs, staff and materials shortages as well as delivery delays as obstacles in keeping up with demand, according to the latest PMI survey (also released this week). 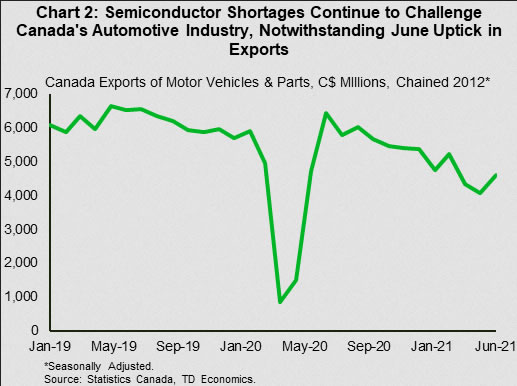 Despite the challenges, the prospect of lesser restrictions in the face of a fourth wave suggests that our forecast for solid second half economic growth remains achievable.