Will ‘King Dollar’ Reclaim its Throne as the Fed Tapers?

One by one, Fed officials are getting behind the idea that their asset purchases should be dialed back soon. Whether this is announced in September or November doesn’t matter much. What matters is that the Fed is years ahead of the ECB and BoJ in the normalization game. The dollar held its ground recently even as US yields crumbled, so it could really shine once tapering gets rolling and Congress delivers even more fiscal juice.

More and more Fed officials are throwing their weight behind withdrawing some liquidity in the next few months. First it was just Kaplan. Then it was Bullard. Last week it was Vice Chairman Clarida, Waller, and Daly joining this group. This week, their views were echoed by Bostic and Rosengren.

The Fed can afford to take its foot off the accelerator because the US economy is booming. Inflation is scorching hot, consumption is off the charts, and the labor market is healing its wounds quickly. Indeed, America could be back to full employment this year already.

Some 5.7 million jobs are still missing for the labor market to reach its pre-crisis glory. However, around 3 million people decided to retire early once the pandemic hit. As such, another three jobs reports like the last one would essentially bring about a full recovery. 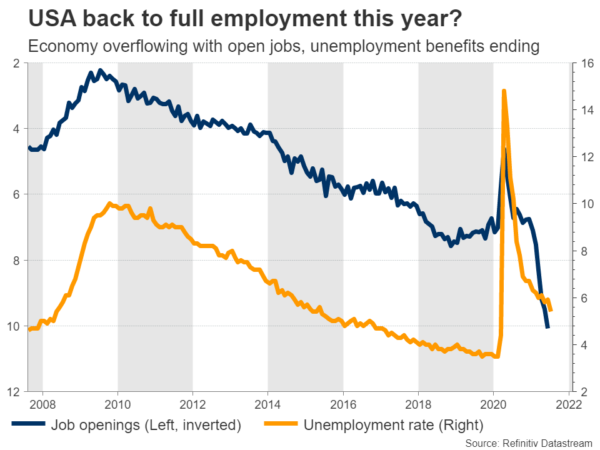 And that is quite likely too. The economy is overflowing with open job positions, which might get filled now that the generous federal unemployment benefits are rolling off and people are returning to the workforce.

The best part is that Congress is about to unleash trillions in new spending to power up the recovery. Senators from both parties are working on a ‘hard’ infrastructure package that includes half a trillion dollars in new spending, while the Democrats are trying to pass a ‘human’ infrastructure bill that would cost $3.5 trillion. The US recovery could be incredible.

So what will the Fed do?

As things stand, the Fed is buying $120 billion per month in bonds and mortgage-backed securities. Policymakers are worried that if they keep this up for too long, it could fuel speculative bubbles in financial markets and ultimately overheat the economy too.

Therefore, they will likely take their foot off the accelerator soon, to avoid having to slam on the brakes later on and risk shocking the system. This means slowing down their asset purchases every month until they reach zero. 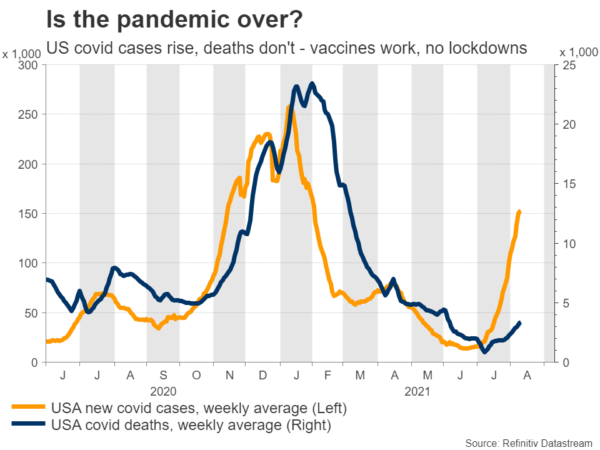 How quickly this tapering process is announced and when it begins will probably depend on the next US employment report. If we get another spectacular nonfarm payrolls print for August, the Fed could announce at its September meeting that tapering will begin in December.

If the next jobs report isn’t stellar, the Fed might wait another month or so. In this case, they could announce in November that the rollback will begin in January. Either way, Chairman Powell will likely prepare the markets for this in two weeks at the Jackson Hole economic symposium, by providing clear signals that tapering is coming.

In the big picture, whether we get a formal taper announcement in September or November doesn’t matter much. It’s only a matter of time. What matters is that the Fed is years ahead of the European Central Bank and the Bank of Japan in this process.

Good news for the dollar

Over time, this central bank divergence should allow US yields to rise faster than their European and Japanese counterparts, making the dollar more attractive versus the euro and yen as interest rate differentials widen to its advantage. 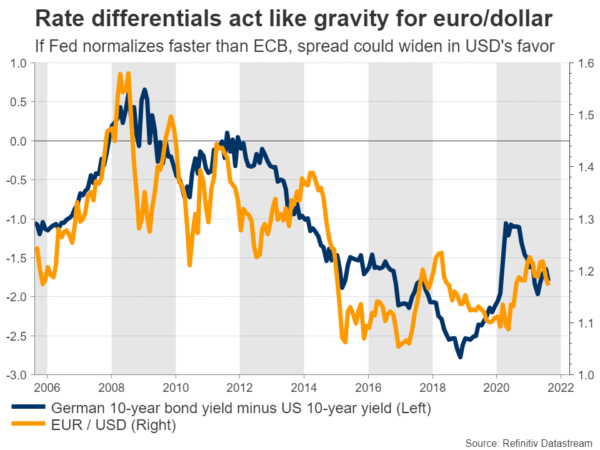 Overall, the outlook for the dollar looks bright. The catch is that any future dollar gains might not show up against the British pound, nor against the Canadian and New Zealand dollars, as those economies are also moving towards higher rates.

Beyond the dollar, all this has implications for gold and stock markets too. Gold is inversely related to bond yields and the dollar. Since gold pays no yield to hold, it becomes less attractive in an environment of rising yields. Likewise, because gold is priced in dollars, it becomes more expensive to buy for foreign investors as the greenback strengthens. 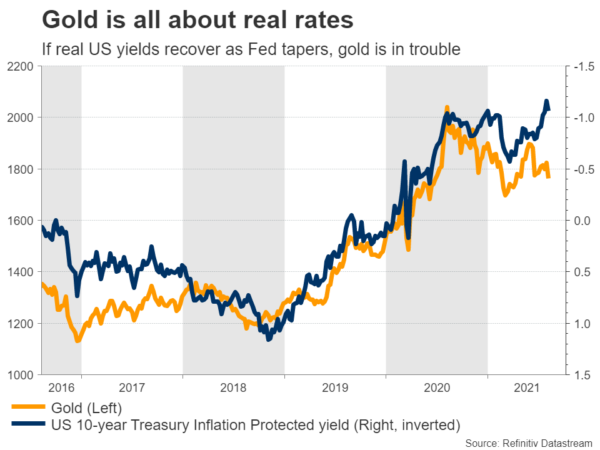 Stock markets are not so straightforward. Less liquidity in the financial system and higher interest rates are theoretically negative for stocks, but then again, stocks tend to perform well when the economy is booming. The example here is the 2015-2019 period, when the Fed was raising rates yet equity markets soared.

It will probably take something much bigger than a Fed tapering announcement for stock markets to bleed, especially with Congress ready to unleash more fiscal firepower.