RBNZ to Lift Rates, What to Expect

The Reserve Bank of New Zealand (RBNZ) is almost certain to raise interest rates when it concludes its meeting at 02:00 GMT Wednesday. Markets have already fully priced in a regular rate increase and are also assigning a small chance for a ‘double’ hike. The kiwi dollar could be disappointed in case it is just a ‘single’ rate hike, but the overall trend seems positive, especially against the euro and yen.

The New Zealand economy is firing on all cylinders. The government went for draconian lockdowns last year, closing down its borders and unleashing a tremendous amount of spending to keep the economy going. As a result, the island nation is virtually virus-free and the economy is booming.

Unemployment is back to pre-crisis levels, economic growth has been impressive, the housing market is scorching hot, and inflation is firing up. The striking part is that this inflation episode probably isn’t ‘transitory’, as wage growth dynamics have started heating up. When you run a closed-borders economy that is almost at full employment, workers suddenly gain much more bargaining power in wage negotiations.

Reflecting this, recent business surveys show that wage pressures are rising. Inflation expectations have also shot higher lately. This is absolutely crucial. It implies that inflationary pressures won’t cool just because supply chain disruptions will fade, like in other economies. 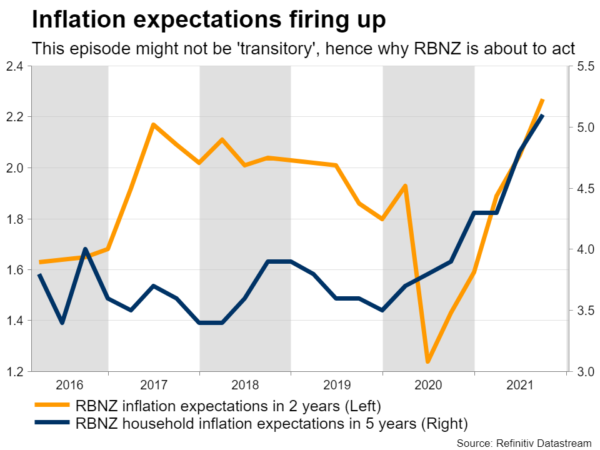 Therefore, with the economy about to overheat, it is high time for the Reserve Bank to step on the brakes. That is done by raising interest rates. Higher rates will ultimately slow down borrowing and spending in the economy, helping to keep inflation under control.

The upcoming meeting promises some fireworks. Markets have fully priced in a regular 25 basis points rate increase, and are also assigning a 20% probability for a ‘double’ hike of 50 points. Investors are essentially saying a rate hike is all but certain – the real question is how aggressive it will be.

It will most probably be a ‘single’ move. A double hike doesn’t make much sense from a risk-management perspective. It could shock the economy and also put massive upward pressure on the exchange rate, which the RBNZ wants to avoid.

The other element arguing against an aggressive move is the global environment. New Zealand is a small export-heavy economy after all, so its fortunes are ultimately tied to the global outlook. That doesn’t look great right now, with the Delta variant rampaging much of Asia. 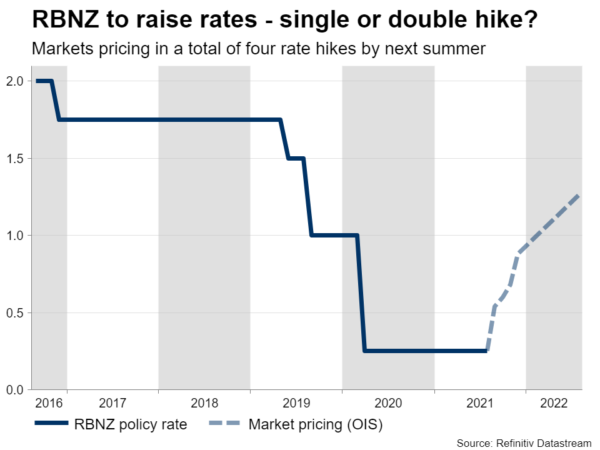 The point is, the central bank doesn’t need to pull the handbrake while the car is going at full speed. Stepping gently on the brakes works for now. If everything goes well, rates can be raised again in a few weeks. In this case, the initial reaction in the kiwi could be negative, as those looking for a double rate increase are left disappointed.

But in the bigger picture, the outlook for the kiwi seems very encouraging. The currency will soon enjoy higher interest rates, way ahead of any other developed economy. By next summer, markets have baked in four RBNZ rate increases.

Over time, this could help the kiwi attract more demand than the euro and yen, whose central banks won’t be raising interest rates anytime soon. The missing ingredient for all that to happen is an improvement in the global outlook. If worries around global growth and the Delta variant fade a little, the kiwi could be the biggest beneficiary.

Taking a technical look at kiwi/yen, if the RBNZ simply delivers a single rate hike, the pair could edge lower to test the 76.00 zone. A break would turn the focus towards 75.65.

On the upside, the first target for buyers might be the recent highs around 77.90, where a violation could open the door towards the 78.75 region.