The Weekly Bottom Line: Holding the Helm in Stormy Waters

From Labor Day onward it was supposed to be relatively smooth sailing for the American economy, underpinned by solid job gains and healthy consumption growth. Instead, the economy is fighting stormy undercurrents caused by the Delta variant, which triggered a slowdown in hiring momentum and a plunge in consumer sentiment heading into the fall. We are confident that the economy will stay the course, but it will take more time and more patience.

This week offered a look back at recent history when Delta was not yet a concern. July’s Job Opening and Labor Turnover Survey (JOLTS) delivered yet another month of record level job openings. Even if Delta-related concerns resulted in a pull-back in August, demand for workers most likely remained strong as evidenced by a higher frequency data from the job site Indeed.com (Chart 1). This indicates that August was another month where the number of jobs available outstripped the number of unemployed, suggesting that businesses may need to find more creative ways to increase employment. 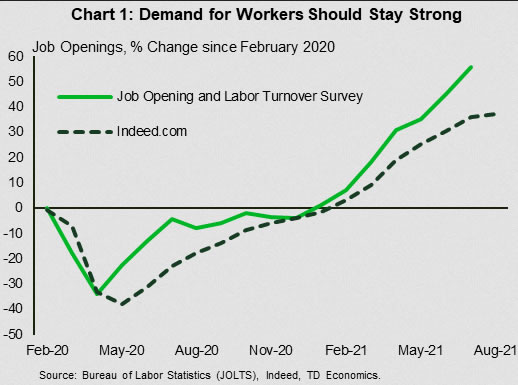 With lingering effects of the pandemic, the job market will likely take longer to recover fully. Economists cite several reasons why workers are not taking advantage of the seemingly insatiable demand for their labor. One of them – pandemic-related emergency unemployment aid has ended this week. Whether it will result in an influx of eager workers is yet to be seen. There is scant evidence that states that ended the additional benefits before the nation-wide expiry date saw any significant boost to employment.

At the same time, limited childcare options remain a concern. In the most recent Census’ household pulse survey released this week, respondents from the states that lead in COVID-19 cases reported an alarming month-on-month jump in the share of households where children were unable to attend childcare because of safety concerns. This was reflected in the August household survey, which showed a reduction in employment of women with kids under 18.

Safety concerns were also widely cited in this week’s Beige Book report that pointed to a slower demand in activities dependent on social interactions, such as dining out, travel, and tourism. The slow-down could result in a roll-back in the recent rebalancing from goods to services consumption. The report also noted “pervasive resource shortages [and] input price pressures” – a sentiment echoed in today’s print of the Producer Price Index, which grew by 8.3% year-on-year. This suggests that businesses remain under pressure to raise prices (Chart 2). 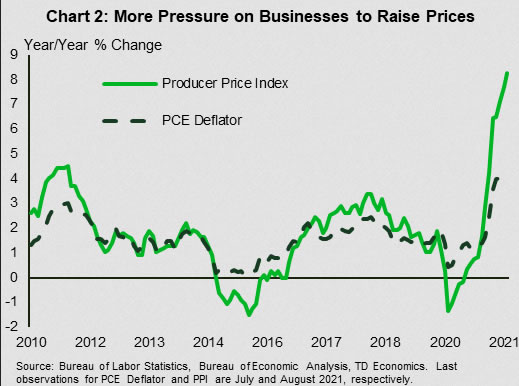 All in all, as a result of Delta, seas are choppier on both supply and demand fronts. But, like past waves, this too is likely to pass, and as it does, the recovery will gain speed. The job of the Fed will be to ensure that the path for inflation also steadies, likely to require a slowing in the pace of accommodation and an easing in asset purchases by the end of the year.

This week’s Bank of Canada interest rate decision was a come-and-go affair. Policymakers did as anticipated, leaving the overnight rate at the effective lower bound (ELB) of 0.25% and maintaining a $2 billion/week pace to their asset purchasing program. Their forward guidance was also unaltered, with the overnight rate expected to remain at the ELB until slack is absorbed (which in their July projection is in the second half of 2022).

More noteworthy was the positive skew underlying their characterization of the economic backdrop. Although they acknowledged the steep miss in second quarter GDP (which contracted by 1.1% q/q annualized versus expectations of a 2.5% gain), domestic demand outside of residential investment was highlighted as continuing to make progress. Perhaps most interestingly, the Bank referred to the employment accelerations in June and July, but ignored Statistics Canada’s flash estimate of a sizeable decline in July’s GDP.

Heading into the meeting, there were compelling reasons to expect the Bank to stand-pat on policy. Most notably, updated growth and inflation projections will accompany their October 27th interest rate decision, providing ample opportunity to offer rationale for any change in course. Our own view sees policymakers having enough confidence in the recovery to reduce their pace of asset purchases to $1 billion/week at their October meeting.

This will move the Bank one step closer to the “reinvestment” phase of their QE program. This is when policymakers will shift from providing additional stimulus to maintaining current levels through adjustments to their bond purchasing program. Governor Macklem spoke on this topic this week, noting that that the switch to reinvestment will still require the Bank to buy an average of about $1 billion worth of bonds each week, and that the transition to this phase will be done in a gradual and measured manner with clear communication from the Bank. The Governor also took pains to emphasize that decisions on interest rates and bond purchases were separate. And, when the time comes to reduce monetary stimulus, the first move would come through an increase in the interest rate. This implies that the reinvestment phase of QE could last until at least the second half of next year.

Ultimately, the conduct of monetary policy will depend on how the recovery unfolds and inflation evolves. On the former front, we expect a decent showing for third quarter GDP growth, underpinned by consumer spending (Chart 1). This view depends significantly on how the economy fared in August, especially given indications that July was a soft month for activity. Today’s jobs report provided some reassurance, as 90,000 jobs were added in August, marking a solid reading. Details were strong in several areas of the report, as job gains were driven by private-sector and full-time positions. The unemployment rate also dropped to its lowest level since the start of the pandemic (7.1%). The one fly in the ointment was hours worked, which increased by only 0.1% m/m (Chart 2). This modest print creates some risk to our expectation for third quarter growth. 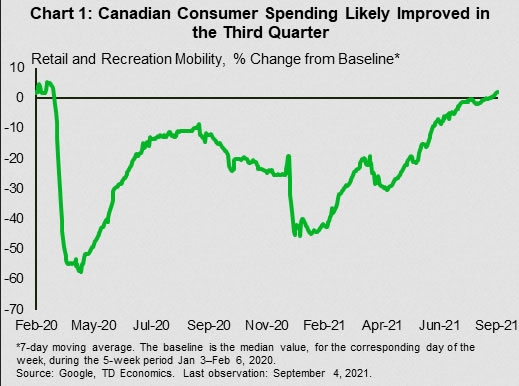 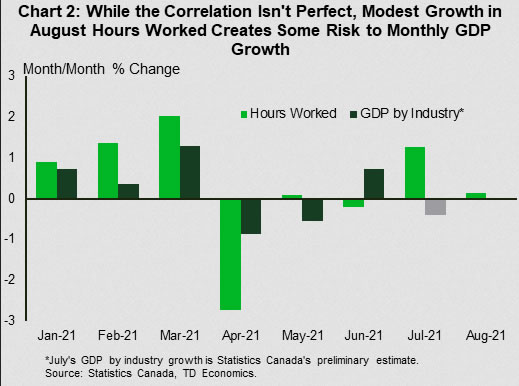