Aussie Climbs Up ahead of Confidence Data

The Australian dollar is in positive territory at the start of the week and has punched above the 74 level. AUD/USD is currently trading at 0.7424, up 0.34% on the day.

The RBA was in the headlines for much of the week, and investors were all ears as the RBA released its quarterly policy statement on Friday. The bank sounded guardedly optimistic about the economy, saying that it expected wage growth to hit 3% and inflation to reach 2.5% by the end of 2023. As for what investors were most interested in, the bank stuck to its projection that it wouldn’t raise interest rates prior to 2024.

The bank has been consistent in projecting a rate hike in 2024, which has meant pushing back against market pricing of a hike in 2023. Australia’s economy is expected to have contracted in Q3, but the markets have been hawkish about a rate hike, and the removal of lockdowns in Sydney and Melbourne has boosted consumer and business confidence. We’ll get a look at business and confidence data later on Tuesday, and the readings could have an impact on the movement of the Australian dollar.

The Australian dollar had its worst week since mid-August, falling 1.57%. The currency was hit hard after the RBA failed to defend its 0.10% bond year target and then formally abandoned the target at last week’s policy meeting.

In the US, October nonfarm payrolls was solid, as the reading of 535 thousand beat the consensus of 455 thousand. As well, the September reading was revised upwards from 194 thousand to 312 thousand, pointing to impressive growth in the labour market. There was more positive news as the unemployment rate dropped and wage growth rose. This all made for an excellent day at the office, but the fly in the ointment was the participation rate, which remained at 61.6%, shy of the forecast of 68.6%. Federal member Esther George said after the FOMC meeting that the Fed would be keeping a close look at whether workers were re-entering the labour market, so investors would be wise to keep a look at the participation rate in upcoming NFP reports. 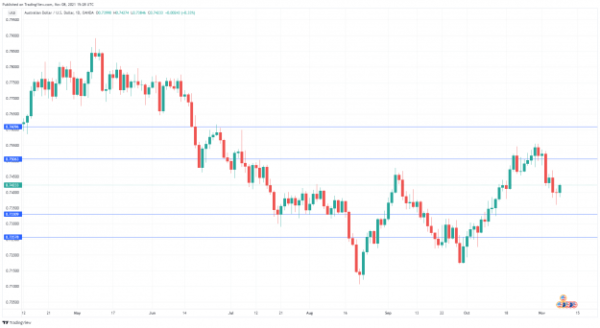