The Consumer Price Index data stole the show this week, with both headline and core inflation (excluding food and energy) at 30-year highs in October. Increased market concern about inflation dampened sentiment in equity markets, and bond yields rose. Market-based measures of inflation expectations have also been on the rise (Chart 1), and market pricing on the first Fed hike was brought forward from September 2022 to July. Last week, we updated our own timing on the first Fed hike to next summer (see Dollars & Sense). 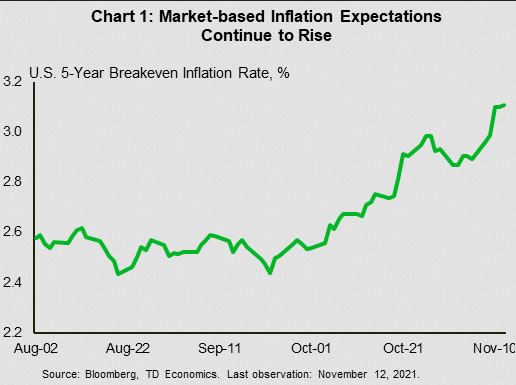 Headline inflation was 6.2% in October on a year-on-year basis, and core inflation wasn’t too far behind at 4.6%. Price pressures were broad based in October, and it was hard to find a category where price pressures were cooling. Energy prices were a big part of the story with a 4.8% month-on-month gain and up 30% versus a year ago. Food prices have also been climbing steadily, and were 5.3% higher than a year ago, the fastest pace since early 2009.
Chart 1 is a bar graph showing month over month gains in U.S. non-farm payroll employment for the month of October 2021. There were gains in monthly employment for all sectors except Government where employment declined by 73 thousand.

Transportation costs have brought the drama when it comes to the 30-year high in core inflation readings (Chart 2). Comparing the drivers of core inflation to two years ago, transportation has contributed over 70% of the acceleration. They were a key factor in the run up in inflation back in the spring as the economy re-opened. They had taken a breather through the summer but were back in action in October. Both new (+1.4% m/m) and used (+2.5% m/m) car prices were on the rise again, which had knock-on effects on rental car prices, which rose rising 3.1% on the month. Price pressures for vehicles are due to the semiconductor shortages hampering availability of new vehicles, driving consumers to the used market. This also affected rental car companies that had to ramp up for the surge in demand for travel. 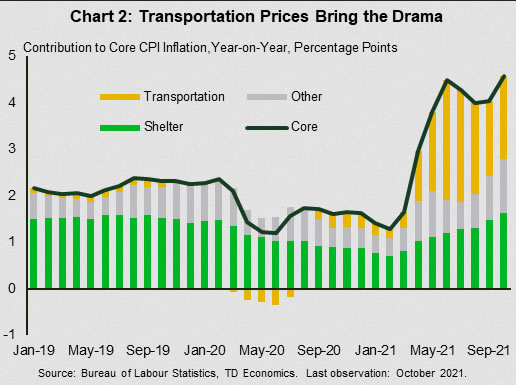 Much of these transportation related price pressures are likely to ebb next year. But, as Chart 2 shows, there has been a gradual swell of inflation pressures both in the heavily weighted shelter component and widespread pressures across a variety of other categories. This is seen in the pace of core inflation excluding transportation, which has picked up to a 2.8% year-on-year pace – quite a bit hotter than 2.2% in October 2019. These underlying price pressures are likely to remain strong enough to support rate hikes by the middle of next year.

At this critical juncture in post-pandemic monetary policy, the make-up of the Fed’s Board of Governors is set to undergo a material shift – starting with a possible change in the Fed Chair. The President is set to announce his decision on whether to re-appoint Chair Powell for a second term in the next two weeks. The betting odds are that Powell will be re-appointed, although Governor Brainard is also likely in the mix.

Whether there is a new Chair or not, there are likely to be at least three new faces on the influential seven-member Board of Governors. Governor Quarles announced his retirement this week, there was already a vacancy on the board, and Vice Chair Clarida’s term expires in January. Any new members are going to have to hit the ground running, as they weigh the balance between fostering continued healing in the labor market, and vigilance on inflation.

Canada – It’s Not as Hot Up in Canada

Hot on the heels of a frothy U.S. inflation report, Canada gets its own peek at October consumer prices next week. Inflation is highly correlated in both countries and based on past relationships, the U.S. report would imply a heated month for Canada too. Our own take is that inflation advanced 0.6% m/m – a steamy gain indeed, but softer than the U.S. print. Similarly, Canadian inflation should clock in at 4.6% on a year-on-year basis, well below the 6.2% pace recorded in the U.S.

October is not unique in that Canadian inflation has consistently trailed the U.S. since the middle of last year, with the gap between the two at one point growing to its highest level in nearly 15 years in June. That’s not all, as when we attempt to control for impacts of the pandemic in 2020 by measuring inflation in 2-year annualized rates, Canada also trails its neighbour to the south. However, shorter-term trends imply that the gap is narrowing.

Canadian inflation rates are running cooler than their U.S. counterparts in several major categories. Measured on a 2-year annualized basis, both food and energy prices are experiencing softer inflation in Canada. Meanwhile, price growth for recreational services in the U.S. has been stronger – likely a function of states lifting public health restrictions sooner than provinces. In addition, the U.S. has seen firmer prices for household furnishing items, alcoholic beverages and even apparel. All told, Canada’s inflation issue is less severe than it is stateside. However, that’s of cold comfort to Canadians who have seen surging prices for items such as gasoline, natural gas and meat products as well as healthcare services (Chart 1). 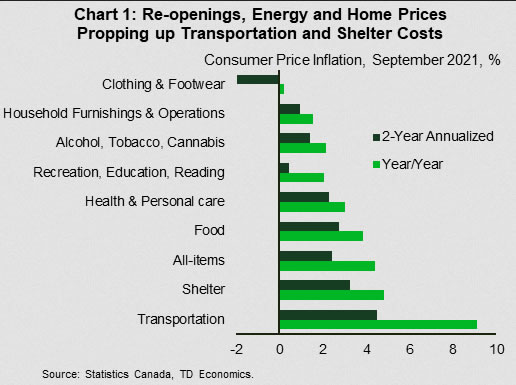 The absence of significant wage inflation in Canada is a bit of a double-edged sword. On the one hand, less inflation in the labour market can prevent a wage-price spiral that turns consumer price inflation from “transitory, but not short-lived” to something even more entrenched. On the other hand, wages for Canadian workers are falling in real terms, and at a faster rate than for workers in the U.S. (Chart 2). This has negative implications for household spending. Fortunately for the outlook, Canadian households have become wealthier during the pandemic, and have a significant amount of savings to draw upon to finance spending and support the recovery. 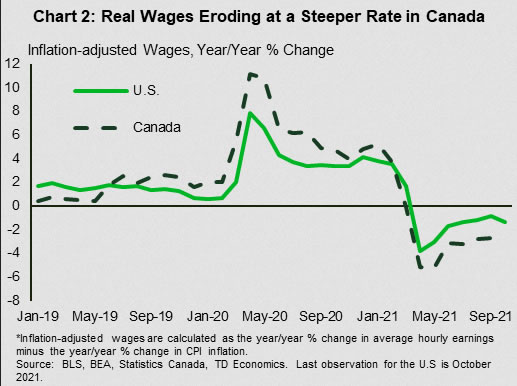