Inflation remained the focus of financial markets this week, with economic data providing continued evidence of accelerating price pressures. Producer prices picked up steam, rising to 9.6% year-on-year in November from 8.8% in the month prior. The acceleration indicates broad-based price pressures throughout the supply chain. Small businesses are also cranking up the pressure. The National Federation of Independent Businesses optimism survey showed that in November, 59% of businesses had raised average selling prices and another 54% plan to raise them further in the months ahead. The former metric is near its all-time high set in the 1970s and the latter is at a new record (Chart 1). 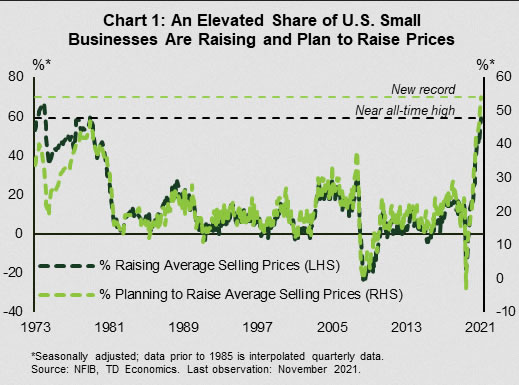 Inflationary pressures also featured prominently in the retail sales report. Sales rose 0.3% in November, below the consensus forecast for a 0.8% print (Chart 2). A strong 1.7% showing in sales at gasoline stations, which reflects hefty energy price gains, helped drive up the headline. Excluding the more volatile categories (including gasoline), sales in the “control group,” used to estimate personal consumption expenditures (PCE), were down 0.1% on the month. The soft November print can be partially explained by some pull-forward in activity, with consumers starting their holiday shopping early given expected shortages and delays. Less generous holiday discounts relative to what consumers may have been accustomed to are also likely to have played a role in last month’s slow-down. A further moderation in activity is likely in December, given the added hurdle of a worsening epidemiological situation. 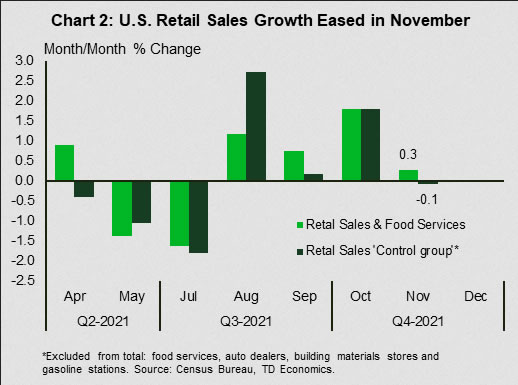 New COVID-19 infections have risen across much of the country and hospitalizations have followed suit. The infections trend is likely to worsen further with the spread of the much more transmissible Omicron variant, which has been detected in most U.S. states. This is expected to weigh on consumer and tourism-related activities.

The Fed is well aware of the above two competing forces – rising inflationary pressures and a worsening public health situation. Economic projections from this week’s FOMC meeting show that most committee members expect the setback from the latest infection wave to prove short-lived. The median forecast calls for the unemployment rate to fall further, reaching 3.5% by the end of 2022. Another potential obstacle to growth, the country’s debt ceiling, was neutralized with the swipe of the pen on Thursday, with President Biden signing a $2.5T ceiling increase into law.

Continued progress toward maximum employment will allow the Fed to focus its efforts on slaying the inflation dragon. It is already moving in that direction. The Fed left the policy rate unchanged at this week’s FOMC meeting, but accelerated the taper of its Quantitative Easing (QE) program. The Fed will reduce the monthly pace of purchases of Treasuries securities by $20 billion and agency mortgage-back securities by $10 billion. This puts QE on track to end by March of next year, opening the window for rates to lift off soon after. This is in line with our expectations. In our updated forecast published earlier this week, we pulled forward our call for the first rate hike to the second quarter of next year, with two more hikes to follow later in the year. This will still leave monetary policy in an accommodative stance, but should help to stem the inflationary tide.

T’was the month before Christmas, and all through the house, Canadians were stirring, discussing bidding wars with their spouse. Sellers were nestled all warm in their beds, while visions of dollar signs danced in their heads. That holiday inspired prologue aside, this week offered a look at how Canadian housing markets fared in November. Home sales bested October’s very healthy level, likely supported by buyers pulling forward purchases ahead of rate hikes set to take place next year.

In a trend that may feel as old to Canadians as Christmas itself, home price growth was steamy again last month (average home prices were up 20% year-on-year). However, the story could be different next year, as rising interest rates play the part of the Grinch for prices. Higher rates are more likely to moderate, rather than reverse, the upward trend in prices, as the economic backdrop should remain healthy (see our latest Quarterly Economic Forecast released this week). There are downside risks to growth as the Omicron variant looms large, forcing a tightening of restrictions across the country this week. For housing, investors have accounted for a rising share of purchases, increasing the sensitivity of home sales to rates.

From the frying pan to the fire, so to speak, as this week brought another hot inflation report for November. The Consumer Price Index rose 4.7% year-on-year, and was up 3.1% when eggnog, candy canes (and other food items) alongside energy are excluded. While the year-on-year rate was unchanged, seasonally adjusted price growth slowed to 0.3% on a month-on-month basis, half the pace of the previous two months. Further relief is likely in the cards next year, offering a belated gift to shoppers (Chart 1). Energy prices should be sledding lower, the inflation impulse from economic reopening will likely fade, and supply chain bottlenecks should become less intense. However, plump economic growth will provide some offset to these forces. 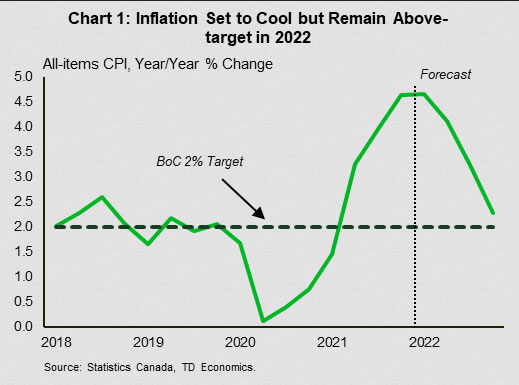 Capping off a tumultuous year, the Bank of Canada and the federal government both made headlines this week. The Bank of Canada renewed its five-year inflation mandate through to 2026, keeping its 2% inflation target and 1 – 3% operating band. However, the Bank now has more flexibility to allow inflation to overshoot in order to achieve maximum sustainable employment. This isn’t much of a change, as they’d already operationalized this strategy during the pandemic. For the federal government, solid (nominal) economic growth has been a blessing, helping improve their fiscal position. Indeed, in their fall fiscal update, the government now projects its shortfall to be $38.5 billion lower in FY 2021/22 than the April budget. They’ve used this room to dole out around $70 billion in new spending through the next several years, mostly to First Nations children and to reform the child-welfare system. This won’t stop the government’s debt burden from improving (Chart 2), and, in a rising rate environment, that might be the best gift of all for policymakers. 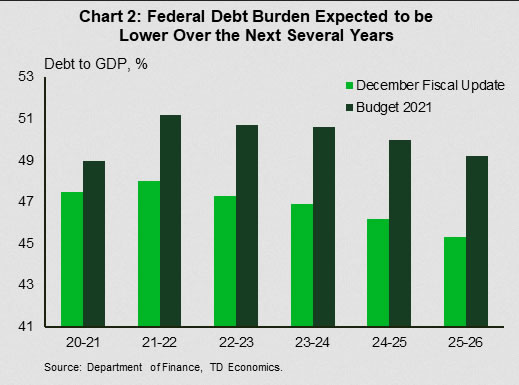