The Japan 225 index (Cash) has recorded a two-month peak of 28,549, resuscitating the uptrend from the 24,502 low, after breaching the recent 28,371 high. The soaring 50-period simple moving average (SMA) is endorsing the more than two-week rally, and the nearing of a bullish crossover of the 200-period SMA by the ascending 100-period SMA could further boost advances in the index.

Currently, the hiking Ichimoku lines indicate sturdy positive forces, while the short-term oscillators are mirroring an increase in bullish momentum. The MACD, some distance north of the zero threshold, has pierced back above its red trigger line, while the improving RSI is nearing the 70 overbought level.

In the positive scenario, an area of highs over the January 6 until 18 period being between 28,745 and 28,851 could provide the first barricade for additional progress in the index. Overcoming this barrier may bolster upside momentum, possibly overrunning the 29,000 handle and encouraging buyers to target the January 5 high of 29,390 before challenging the 29,502-29,570 resistance band.

Summarizing, the Nikkei is sustaining a strong bullish bearing above the SMAs and the 27,809 trough. A break above the 28,745-28,851 obstacle could boost upside impetus, while a retracement below the 27,004 level may spark worries about intensifying negative tendencies. 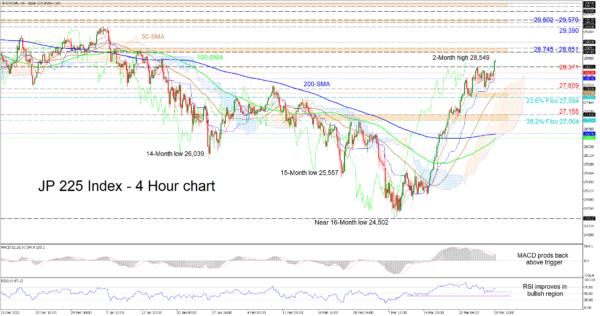