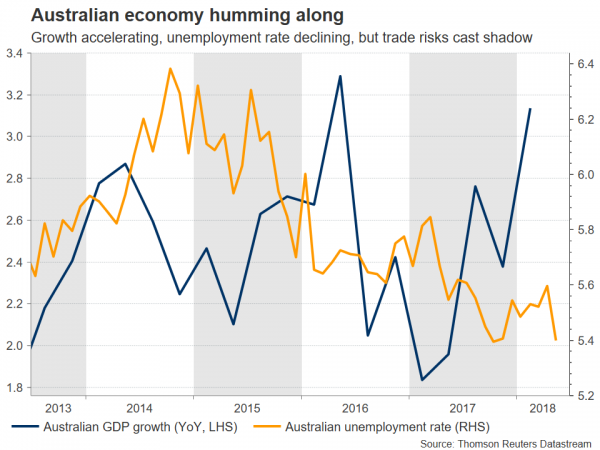 The Reserve Bank of Australia (RBA) will announce its rate decision on Tuesday, at 0430 GMT. With the Bank almost certain to make no changes to its policy, price action will be dictated by any changes in the phrasing of the accompanying statement. Recent price action suggests investors may be anticipating a more cautious stance. This implies that the risks surrounding the aussie’s reaction may be asymmetrical, with the expected concerned tone leading to a modest decline, but a more neutral bias potentially triggering a sizeable relief rally.

The RBA will have a tough balancing act at its hands when it gathers tomorrow. On the one hand, the domestic Australian economy is humming along nicely. Economic growth was stronger than anticipated in the first quarter, the labor market continued to post slow but steady gains in recent months, and the exchange rate has declined substantially – making Australia’s exports more competitive. Additionally, housing prices have started to correct lower, alleviating fears of financial risks and asset bubbles related to low interest rates.

On the other hand, international developments and most notably trade frictions, present downside risks. The US-China standoff has escalated lately, and should the situation deteriorate any further, Australia will likely be among the first nations to be caught in the crossfire. Not only due to its heavy dependence on commodity exports, which would take a hit in case of a trade war, but also due to its deep economic ties with China. Then, there’s the issue of higher US interest rates. Although the RBA maintains its own policy unchanged, rising borrowing costs in the US are spilling over into slightly higher rates for Australian banks, costs that will reportedly be passed onto consumers soon. This is particularly worrisome, as Australian households are heavily indebted already, and thus may struggle faced with higher rates.

The question is how the Bank will deal with such uncertainties. Will it strike a more concerned tone, as the RBNZ did last week, or will it maintain its neutral “wait and see” attitude? Judging from recent price action, markets seem to be gearing up for the former scenario. Aussie/dollar is trading near an 18-month low awaiting for the rate decision, while any surviving speculation for a near-term RBA rate increase has evaporated. At the time of writing, Australia’s OIS no longer indicate any likelihood for a rate hike this year, but instead suggest a tiny probability for a rate cut.

This has two implications. Firstly, that if the Bank indeed strikes a cautious tone as investors seem to anticipate, then the negative reaction in the aussie may be relatively modest, as that much is already expected. Secondly, anything less than a dovish stance could come as a hawkish surprise for the market, potentially leading to a substantial relief bounce in the Australian currency.

Technically, looking at aussie/dollar, further declines could encounter immediate support near the 18-month low of 0.7323, with a downside break shifting attention to the 0.7250 zone, defined by the inside swing high on 30 December 2016. Even lower, the declines may stall near 0.7155, the bottom of 28 December 2016.

Conversely, if the Bank is less dovish than investors expect, resistance to advances may come around 0.7445, this being the high of June 25. If the bulls pierce through it, eyes would turn to the 0.7495 territory, marked by the inside swing low on May 29. Higher still, the area around 0.7675 may provide resistance.