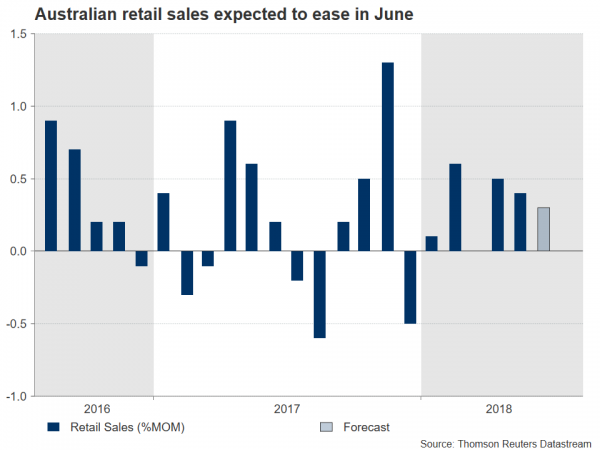 Australian retail sales data for June will be hitting the markets on Friday at 0130 GMT, in what is perhaps the last important release before the Reserve Bank of Australia concludes a meeting on monetary policy next week. Meanwhile, Australia seems to be getting caught in the crosshairs of the trade dispute between the US and China, with its currency coming under pressure due to the country’s heavy export dependency, but also as a result of the nation’s close economic ties with China.

Retail sales are anticipated to grow by 0.3% m/m in June, reflecting an easing relative to the pace of expansion in the two previously tracked months of 0.5% and 0.4% in April and May correspondingly. Despite slowing sales being projected on a monthly basis, second-quarter data are forecast to show retail sales expanding by 0.8% q/q, this constituting a notable acceleration compared to the previously tracked quarter’s 0.2%.

With wage growth – which can stoke inflationary pressures – persistently subdued despite a relatively low unemployment rate and troubling record-high levels of household debt, Friday’s readings are unlikely to materially alter RBA policymakers’ thinking when they conclude a meeting on monetary policy on August 7. Specifically, markets widely expect the central bank to keep its policy rate at the historic low of 1.50% for the 22nd consecutive meeting, the longest stretch without an interest-rate move in the country’s modern history.

Still, given that retail sales are used as somewhat of a gauge for household spending which constitutes more than 50% of the Australian economy’s annual GDP, the release holds some significance and might prove market moving; the data beats delivered in the two previous months did boost the local dollar versus its US counterpart.

Better-than-forecasted retail sales could push AUDUSD higher. Given a move above the 0.74 round figure, an additional barrier to the upside may come around the current level of the 50-day moving average line at 0.7453. More bullish movement would shift the attention to the region around the 23.6% Fibonacci retracement level of the January 26 to July 2 downleg at 0.7503, including the 0.75 handle. On the downside and in case of disappointing prints, support may come around the 19-month low of 0.7308 hit in early July, including the 0.73 mark. Steeper losses would increasingly bring into scope the 0.72 handle.

The aussie/dollar is on the decline on Thursday, suffering on the back of rising Sino-US trade tensions as the US seems to be ratcheting its China-directed tariff threats. In particular, the aussie fell to a two-week low of 0.7352 on Thursday despite the delivery of upbeat trade data out of Australia earlier in the day. Aussie-shorting by traders is related to the nation’s export reliant economy, with the greatest proportion of those exports heading to China. A deteriorating outlook on global trade or the Chinese economy is thus seen as aussie-negative and vice versa.

Lastly, in terms of positioning on AUDUSD, it should also be kept in mind that the US will see the release of its employment report for July on Friday at 1230 GMT.