UK Services PMI to Revert to Slower Gear in July; Unlikely to Prove a Big Driver for Pound 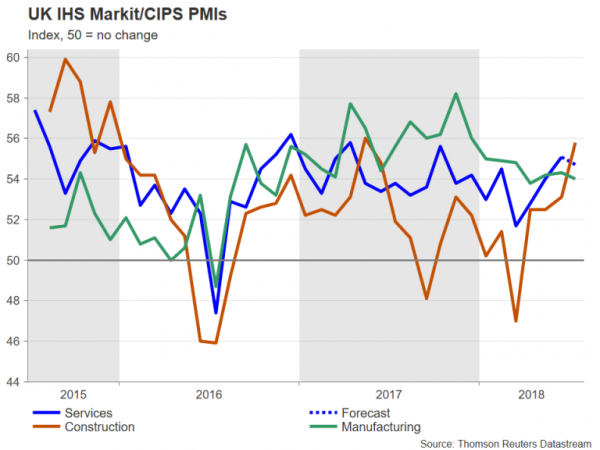 After the highly anticipated Bank of England decision on Thursday, the focus for sterling at the end of the week will turn to the services PMI out of the United Kingdom on Friday at 08:30 GMT. The IHS Markit/CIPS services PMI is expected to highlight the BoE’s dilemma, with activity in the sector expected to expand only moderately even as the Bank presses with a rate hike – its second since the global financial crisis.

While a modest rebound in growth in the second quarter was enough to convince Monetary Policy Committee (MPC) members that the economy could withstand some removal of monetary stimulus, that may not be sufficient going forward to warrant subsequent rate hikes. Investors will therefore be watching closely how the largest sector of the UK economy performs over the coming months.

The services PMI is forecast to ease to 54.7 in July from 55.1 in June – an 8-month high, having bounced back strongly from a 20-month low in March. While being nothing phenomenal, this would still be comfortably above the 50-neutral level, where a reading above it represents expansion in activity and a figure below it points to a contraction.

Growth in the manufacturing sector has also lost steam since the beginning of the year. The manufacturing PMI fell sharply from a high of 58.2 in November to a 17-month low of 53.8 in April. It rebounded only gradually in May-June before slipping again in July to 54.0.

With growth in the rest of the world (bar the US) also losing some momentum during 2018, the UK’s relative performance isn’t that much worse in comparison. However, with uncertainty over a Brexit deal intensifying in recent weeks, businesses in the UK are understandably becoming increasingly gloomier about the outlook and this could weigh on growth in the coming quarters, giving the BoE little scope to raise rates further.

That probably explains why traders weren’t too impressed by the Bank of England’s rate increase on Thursday, with sterling slipping after the decision, having barely recovered from July’s 10-month low of $1.2955 in anticipation of the hike.

Brexit talks have stalled recently as the UK and the EU struggle to reach a compromise on a customs solution and over the tricky question of the Northern Irish border. The prime minister, Theresa May, will be meeting with the French president, Emmanuel Macron, on Friday to try and break the deadlock. Britain’s new Foreign Secretary, Jeremy Hunt, is travelling to European capitals this summer to win support for May’s Chequers plan on a “facilitated customs arrangement”. Hunt warned his French and German counterparts this week that the chances of a no-deal Brexit are “increasing by the day”.

However, despite the negative headlines, the European Commission has not completely rejected May’s customs plan and talks are ongoing, keeping hopes alive that a deal could be reached by October.

In the meantime, the pound is expected to see only limited upside from any positive data, including Friday’s services PMI. In the event of a data beat, cable would seek to reclaim the 1.31 level after dropping below it in response to the BoE decision. A convincing climb above the handle would open the way to the July 26 peak of 1.3213, while further up, the 1.33 mark would be the next key level to watch.

But should the services PM