Markets Digest Turkish Troubles With Heightened Risk Over Next 24-Hours 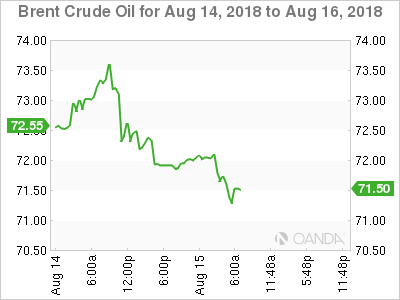 Wednesday August 15: Five things the markets are talking about

In Turkey, President Erdogan implemented an additional tax on a range of U.S imports (autos, tobacco and alcohol), signalling its squabble with the U.S. will continue. The lira (-6.1% at $6.1148) has, for the time being stabilized, gaining outright, along with other EM pairs.

The market is still trying to gage the possibility of contagion to other emerging markets and to Europe. For now, it’s contained, however, if the crisis drags on or deepens, it has the potential to affect the E.U economy and ECB’s policy.

The Turkish finance minister has a planned conference call tomorrow where he is expected to reassure investors concerned by Erdogan’s influence over the economy and his resistance to interest rate hikes to tackle double-digit inflation.

On tap: U.S retail sales data appears this morning (08:30 am EDT), followed by housing data on Thursday. In Brussels Thursday, Brexit talks between the E.U and the U.K resume.

In Japan, the Nikkei dropped overnight, mostly on profit taking after Tuesday’s sharp gains, though the drop was limited as the yen’s (¥111.28) weakness supported investor sentiment. Losses were concentrated in the gaming sector due to concerns over delays in new game releases in China. The Nikkei share average ended -0.7% lower, while the broader Topix declined -0.8%.

Down-under, Aussie shares rallied to a new decade high on strong earnings. The S&P/ASX 200 index firmed +0.5% at the close of trade. The benchmark rose +0.8% on Tuesday. In S. Korea, the Kospi was closed for a holiday.

In Hong Kong, stocks fell overnight; ending atop of their 12-month lows on bearish Chinese investor sentiment and broader concerns about emerging markets. At close of trade, the Hang Seng index was down -1.55%, while the Hang Seng China Enterprises index fell -1.95%.

In China, it was a similar story with stocks extending their losses overnight to a third consecutive day of declines as worries over the country’s cooling economy and the Yuan’s (¥6.8856) descent to a 15-month low knocked investor confidence. The blue-chip CSI300 index fell -2.4%, while the Shanghai Composite Index closed down -2.1%.

Oil prices trade under pressure, weighed down by a soft global economic outlook and a report of rising U.S crude stocks, despite U.S sanctions on Tehran threatening to curb Iranian crude oil supplies.

According to U.S API data yesterday, U.S crude stocks rose by +3.7M barrels in the week to Aug. 10, to +410.8M barrels – crude stocks at the Cushing, Oklahoma delivery hub rose by +1.6M barrels.

Expect dealers to take their cue from today’s official U.S oil inventory data from the EIA (10:30 am EDT).

Bank Indonesia surprised the market this morning by hiking its benchmark interest rate a fourth time in three-months, moving quickly to contain the EM volatility and curb a slide in its currency. The seven-day reverse repurchase rate was raised by +25 bps to +5.5%.

Note: Bank Indonesia has been among the most aggressive in Asia in tightening policy this year, raising rates by a total of +125 bps since May.

Policy makers ‘hawkish’ rhetoric suggests that they will continue to prioritize price stability and is willing to do more if required. For now, the aggressive hikes are helping to stabilize the rupiah (IDR), whi