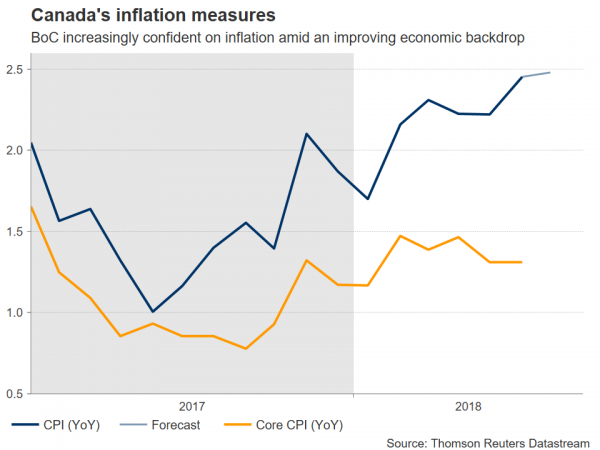 Canada will be on the receiving end of inflation data for July on Friday, at 1230 GMT. Forecasts suggest the headline CPI rate remained unchanged, which would likely keep the Bank of Canada (BoC) on track to deliver at least one more rate increase this year and thereby, potentially benefit the loonie. Beyond economic data, any updates on the future of NAFTA will also be crucial for the currency, particularly following recent reports that a deal may be inching closer.

The Canadian economy has been humming along nicely in recent months, with the labor market continuing to tighten and the latest monthly GDP data beating estimates, suggesting that economic growth likely accelerated in Q2. At the same time, headline inflation picked up speed – boosted by past movements in oil prices. While the core measure has stayed relatively subdued, BoC policymakers remain confident it will gradually creep higher as well, amid an improving economic backdrop.

The relatively strong outlook has kept the BoC on track with its normalization efforts, raising rates twice already this year despite the ongoing uncertainty surrounding the NAFTA negotiations. Perhaps as a testament to the strength of the economy, investors appear confident the BoC will hike rates at least once more this year, currently assigning an 86% probability to such an action according to Canada’s OIS. Some pundits even suggest markets are underestimating the possibility that the Bank could raise rates twice by year-end, especially if trade tensions subside a little and domestic economic figures remain firm.

Turning to the upcoming data, Canada’s CPI rate is projected to have held steady at an elevated 2.5% on an annual basis in July. No forecast is available for the core CPI figure, which excludes volatile food and energy items; it stood at 1.3% in June. Looking at gauges of inflationary pressures, the nation’s Markit manufacturing PMI noted that prices charged for final products during the month rose at the highest pace since the survey began in 2010. In isolation, this may suggest that an upside surprise is more likely than a downside one in the CPI prints.

Technically, looking at dollar/loonie, stronger-than-anticipated figures could push the pair lower. Initial support to declines may come around the 1.3045 zone, defined by the August 15 lows. Even lower, the August 7 trough of 1.2955 would come into view, before the 1.2855 territory attracts attention – marked by the June 6 low.

Conversely, in case of disappointing CPI prints that scale back expectations for more BoC tightening this year, immediate resistance to advances could be found near 1.3175, the area that halted the pair’s advance on August 12 and 15. An upside break may shift the focus to the 1.3290 handle, identified by the peaks of July 20, with ever steeper bullish extensions aiming for the 14-month high of 1.3385.

Beyond economic data and monetary policy, the other decisive factor for the loonie will likely be any developments related to NAFTA. Recent media reports suggest that bilateral US-Mexico negotiations are on a good path, and could produce positive results as soon as this month – at which point Canada will be invited back to the table to finalize a deal. While some disagreements still linger, several sources seem to agree there’s clear positive momentum in the talks. Indeed, seeing this through the eyes of President Trump, a deal prior to the US midterm elections in November could be valuable, in the sense that it can be presented to the electorate as a victory – and something concrete with which to justify his administration’s confrontational trade policies. Any hints from the relevant officials that a deal is indeed near its completion could trigger a notable relief rally in the Canadian currency.