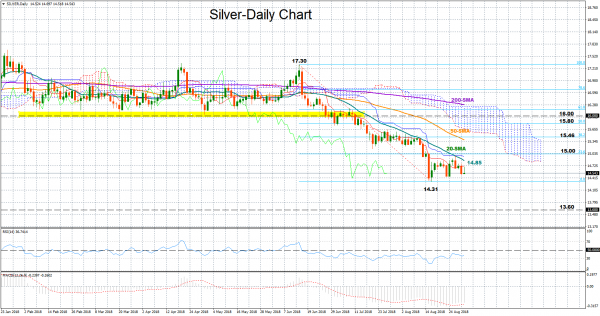 Silver turned increasingly bearish after it dropped below the 16.00 key-level, the bottom of its range-bound trading recorded between early February and mid-June, printing lower lows and lower highs until it reached one-year lows at 14.31 on August 16. Since then, the market has been moving sideways, with the RSI and the MACD supporting that chances for a bull market are minimal in the short-term; the RSI is negatively sloped below 50 and the MACD holds steady marginally above its red signal line and far below zero.

On the flip side, a correction to the upside could quickly meet the 20-day simple moving average currently at 14.85, ahead of the 23.6% Fibonacci of the downleg from 17.30 to 14.30, at 15.00. Further up, bullish actions could try to close the day above the 38.2% Fibonacci of 15.46, seen as a strong resistance during the past couple of weeks. Even higher and above the 50% Fibonacci of 15.80, traders could confirm the start of an uptrend.

In the bigger picture, silver is trading bearish below the Ichimoku cloud and under all its negatively-sloped moving averages.