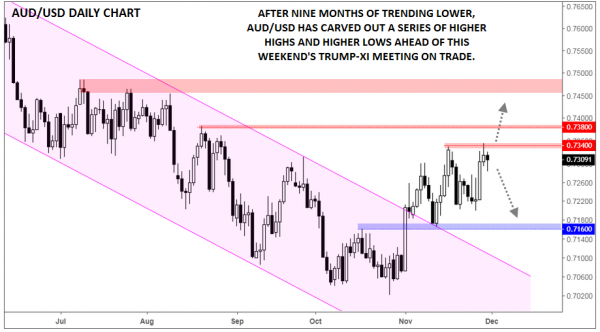 Of all the major currencies, the Australian dollar is perhaps the most sensitive to trends in global trade. The country’s commodity-centric economy and close ties with China mean that any slowdown in international business may be seen Down Under first.

Viewed in that light, the Aussie’s recent rally could be seen as a sign that FX traders are feeling somewhat optimistic ahead of the highly-anticipated meeting between Presidents Trump and Xi at the G20 meeting in Argentina. While headlines over the past couple of days have been mixed, traders are seemingly anticipating that the meeting will result in, at minimum, a delay in the escalation of US tariffs on Chinese goods. Such a development, if seen, would be consistent with the President’s “Art of the Deal” philosophy.

Unlike the complicated, multi-party Brexit situation, the outcome of the meeting is likely to depend entirely on Trump’s appetite to make a deal. Given the recent pullback in US stock markets and his mounting legal concerns, there’s reason to suspect The Dealmaker-in-Chief may be willing to back down. That said, if Trump feels he isn’t getting a “fair” deal from China, he may well escalate the conflict further. One way or another, we expect some substantial market moves at next week’s open.

Returning to AUD/USD, rates rallied to briefly touch a 3-month high above 0.7340 yesterday before dipping back toward 0.7300 today. More broadly, the pair has definitively seen a shift from the well-defined series of lower highs and lower lows that dominated from February to October. Rates have now put in a series of higher highs and higher lows on the daily chart.

If we see a delay in tariffs (or, in an unlikely scenario, some sort of US-China trade agreement) emerge out of this weekend’s G20 summit, AUD/USD could rally further to test the mid-August highs at 0.7380 and potentially the July peak in the mid-0.7400s next week. Meanwhile, a lack of progress between Presidents Trump and Xi could take AUD/USD back down below this week’s lows near 0.7200.