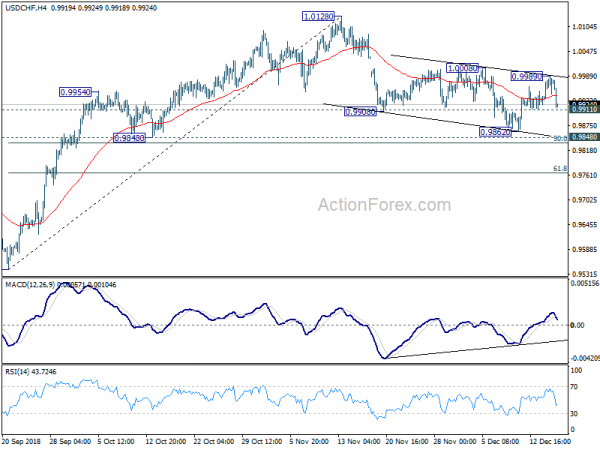 European majors are trading generally higher today, as led by Swiss Franc. Euro is also strong but to a lesser extend while Sterling just follows. On the other hand, Dollar is under some selling pressure, in particular after much weaker than expected manufacturing. It’s yet another piece of data that points to slow down in the US. But for now, loss in the greenback is still limited, as traders are cautious ahead of FOMC rate decision, statement, and economic projections to be released on Wednesday.

Technically, though, today’s sharp fall in USD/CHF suggests that rebound from 0.9862 has possibly completed at 0.9989. 0.9911 minor support is now in focus and break will probably extend the correction from 1.0128 with another taken on 0.9484 key support. Meanwhile, USD/JPY’s pull back from 113.70 is also extending lower and on acceleration it would head back to 112.23 support.

Released in US, Empire State manufacturing index dropped sharply to 10.9 in December, down from 23.3 and missed expectation of 20.1. That’s also the lowest level since May 2017. Another point to note is that 6-month forward looking indicator also dropped to 30.6, down fro 33.6. Growth was “noticeably slower than in recent months” with deteriorating optimism.

In the latest monthly report, Germany’s Bundesbank warned that it may take more time for the auto industry to recovery from its recent “temporary” slump. It noted that “Normalization in the automotive industry may be slower than initially thought,” And, “the weak order intake from Germany and the slowdown in registration numbers could be an indication that domestic consumers are currently holding back on purchases”. Nevertheless, export orders remained strong and other segments of the economy performed well. In Q4, Bundesbank still expected “noticeable expansion.

In Italy, leaders of the coalition government sounded optimistic that they would eventually avoid disciplinary actions by the EU over its 2019 budget. Leader of the League Matteo Salvini said, after meeting with 5-Star Movement head Luigi Di Maio and Prime Minister Giuseppe Conte, “We have found an agreement on further fiscal reductions that probably will be appreciated by the EU.”

Salvini’s spokeswoman also said that there is “total agreement between Conte, Salvini and Di Maio on the numbers and contents of the proposal to send to Brussels,” regarding 2019 budget plan. And she denied there were tensions within the coalition government and rumors that Prime Minister Giuseppe Conte had threatened to quit. Separately, Di Maio also said the talks with the commission “will allow us to avoid an infraction procedure”.

US ambassador to WTO: China is incompatible with the open, market-based approach

At the WTO Trade Policy Review of the US, the country’s ambassador Dennis Shea complained that China’s ” state-led, mercantilist approach to the economy and trade” and actions are “incompatible with the open, market-based approach” of the WTO and its members. At the same time, “he further criticized that “the WTO is not well equipped to handle the fundamental challenge posed by China”.

He elaborated and said “China pursues an array of non-market industrial policies and other unfair competitive practices aimed at promoting and supporting its domestic industries while simultaneously restricting, taking advantage of, discriminating against, or otherwise creating disadvantages for foreign companies and their goods and services.”

And, “from forced technology transfer to the creation and maintenance of severe excess industrial capacity to a heavily skewed playing field in China, the results of China’s approach are causing serious harm to the United States and many other WTO Members and their companies and workers.”

On the other hand, he hailed that the US “maintains one of the world’s most open trade r