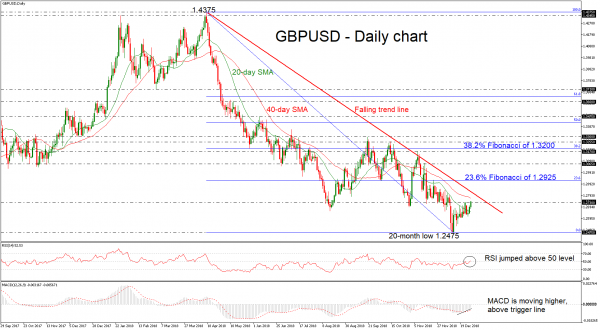 GBPUSD has rebounded somewhat after falling to a 20-month low of 1.2475 on December 12 and momentum indicators are endorsing that the market sentiment might get better and create some gains in the daily timeframe, despite the latest sideways movement; the RSI indicator is sloping slightly up marginally above 50, while the MACD oscillator is increasing strength to the upside and towards the zero line.

Should upside movement dominate in the near term, the market might touch the 40-day simple moving average (SMA) around 1.2770. Steeper increases may overcome that point and surpass the falling trend line to test the 1.2925 barrier, which is the 23.6% Fibonacci retracement level of the downleg from 1.4375 to 1.2475.

Alternatively, if the price moves lower again, support could come from the previous trough at 1.2475. Further down, the price could rest around the 1.2360 hurdle, taken from bottom on April 2. A rally beneath this region would clarify that a downtrend is in progress, shifting focus to the 1.2100 psychological level.


To sum up, the short-term risk looks to be turning positive, while in the long-term view, the downfall from 1.4375 is still active and hence the outlook remains negative.