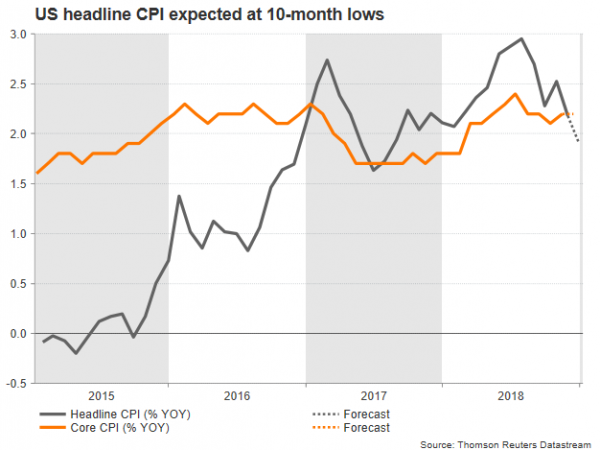 Since it is uncertain how long the impasse over funding Trump’s wall will keep parts of public services closed in the US including the Bureau of Economic Analysis, which is responsible to update the core PCE index, the core CPI figure will attract extra attention this week. Should the measure beat forecasts, suggesting that inflation is well anchored, investors may turn more positive that the Fed may not abandon its rate hiking plans this year. *if you want to trade professionally use our forex robot*

On Friday at 1330 GMT, the US Department of Labor Statistics is expected to show that the headline CPI contracted by 0.1% in December on a monthly basis for the first time after eight months, sending the yearly gauge down by 0.3 percentage points to 1.9% (a 10-month low). Undoubtedly the recent crash in oil prices could be the main catalyst behind the weakness as gasoline prices declined for 12 weeks in a row, with the Energy Information Administration saying that demand in the US was down at almost two-year lows in the week ending December 28 despite holidays travelling.

Indeed, the core CPI figure could prove that the lost momentum in inflation is a product of temporary volatility and not of persisting consumption-negative pressures, if the measure holds steady at 0.2% m/m and 2.2% y/y as analysts forecast. Still, the Conference Board Consumer Confidence index which registered its second monthly decline in December after hitting a decade-high in October, could be a warning sign that households are turning more careful with their overall spending.

The Federal Open Market Committee (FOMC) finished 2018 with another rate hike in December, marking four in total for the year but the minutes from the gathering released yesterday revealed that a few policymakers were hesitant about their decision due to the low-inflationary backdrop. For the same reason and acknowledging the risks from escalating trade frictions and a slowing global economy, the Committee downgraded its rate projections from three to two. Yet the cautious language used in the minutes coupled with Powell’s latest dovish remarks and a row of discouraging data creates doubts about whether the Fed could push tightening even further this year, while the scenario of a rate cut has already started to grow in investors’minds.

With the Fed turning more data-sensitive and the already three-week-old government shutdown threatening the on-time issuance of the core PCE index, which the Bank relies on to adjust policy, the spotlight will shift to Friday’s CPI readings which consequently may bring a higher-than-usual-volatility to the dollar.

An upward surprise in the numbers could restore investors optimism for further monetary tightening in coming months, scrapping chances for rate cut as well. In this case, dollar/yen could potentially visit the 50-period simple moving average on the 4-hour chart (108.67) which recently acted as a barrier to upside movements. Above that line, the bulls may move between 109.50 and 110.50, while higher 111 and 111.50 may be the next targets.

If the data disappoint, clouding prospects for higher inflation and thus additional rate hikes, the pair could move south to meet support near 107.70. Falling lower, the door could open for the 107 round level, while if this fails to hold too, bearish action may stop near 106.

Previous: Powerful Reversal Pattern on USD/JPY Points Towards 108.4 Area – Elliott Wave Analysis
Next: How to Become a Better Trader: Psychology and Process |Podcast