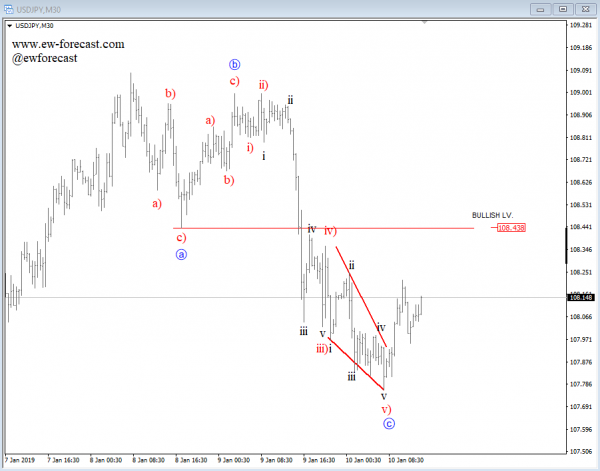 USDJPY is showing us a three-wave corrective decline called a flat correction, because of only three legs within the first wave »a« and the second wave »b«. We see this correction as completed, especially after that sharp bounce out of an ending diagonal which was located in wave c. In such we expect to see more upside on the pair, ideally in five waves from the lows with a break above the 108.44 level. That said, be aware of a temporary pullback during the uptrend. ((if you want to trade professionally use our forex robot 2019)

An ending diagonal is a special type of pattern that occurs at times when the preceding move has gone too far too fast, as Elliott put it. Once completed it tends to push price into a sharp reversal into the opposite direction. USDJPY, 30Min

Signal2forex reviews
Previous: BREXIT: Corbyn Readies No-Confidence Motion Ahead of Next Week’s Meaningful Vote
Next: Dollar to Take a Special Look at US CPI