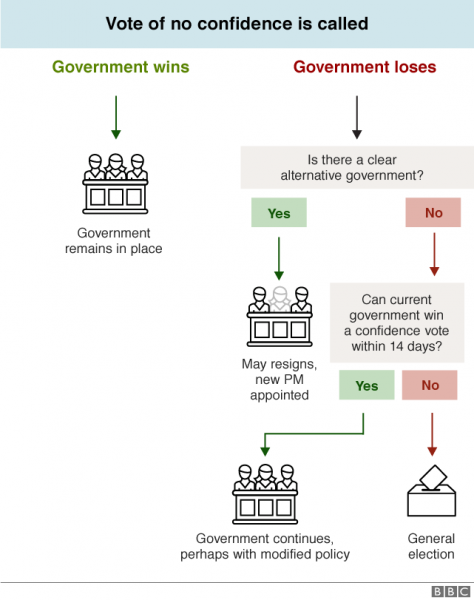 The debate over Theresa May’s Brexit deal is careening toward a dramatic conclusion ahead of the scheduled Parliamentary vote on Tuesday.

In the latest act in Brexit’s Shakespearian tragedy, Labour leader Jeremy Corbyn has stepped up calls for a general election “at the earliest opportunity” to “break the deadlock” over Brexit. Reading between the lines, Corbyn appears set to call for a no confidence motion in the government if May’s bill is defeated next week, as widely expected. Yesterday, UK MPs voted to decrease the window for May to come up with an alternative plan from 21 days to just 3 days, meaning the whole situation could come to a head in less than two weeks’ time.  *if you want to trade professionally use our forex robot*

For those not intimately familiar with UK politics, a majority vote of no confidence would give the government 14 days to try to win another confidence vote, and in failing that, would lead quickly to a new general election as this handy graphic from the BBC shows:

For now, Corbyn is focusing on the potential for another election, though many in the Labour party are arguing for a second referendum, which could further muddy the waters and cast a pall of uncertainty over the pound moving forward.

Speaking of sterling, the UK’s currency is holding up relatively well amidst the latest drama. GBP/USD has recovered off last week’s mini-flash-crash lows and just yesterday saw its highest close in over month. That said, the longer-term trend continues to point lower, and it will be difficult for the currency to rally meaningfully as long as the cloud of Brexit uncertainty hangs over the whole situation. Swing traders will likely be looking to sell any rallies while keeping a close eye on fundamental developments.