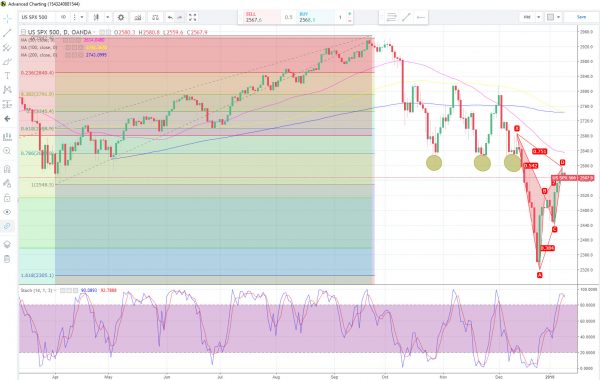 The stock market rally could be ripe for a pullback after recovering almost one-third of slump we saw in the fourth quarter. Today’s weakness is being attributed to poor holiday sales from Macy’s and concern over what will be the next step in the latest round of US-China trade discussions. The Dow Jones Industrial Average opened lower by 0.5%, while the dollar traded mixed against its major trading partners.  *if you want to trade professionally use our forex robot*

With 50 days left until the March 1st deadline of the next round of tariff increases from the US, market participant skepticism is growing that the US and China will not be able to layout a structural framework agreement for a long term trade deal. Both the US and China issued statements following three days of talks, with the US providing a long list of outstanding issues. China’s Commerce Ministry spokesman Gao Feng noted that that progress had been made during the talks on structural issues including forced tech transfers and the protection of intellectual property rights. If the US confirms, that would be huge progress in talks, as rectifying the forced technology transfer issue is a major goal from the Trump administration.

Yesterday the FOMC Dec Minutes stated that officials expressed less certainty about the timing and size of future rate increases. Many Fed Members believed they could afford to be patient about further policy tightening given muted inflation pressures of December meeting with a few noting that they should assess impact of risks that had become more pronounced in recent months. Today will be busy with Fed speak. We already heard from Fed’s Barkin, he is a hawk and a non-voter. His comments were pretty much in line with the Fed statement and Minutes. He sees slower growth in 2019 compared to 2018. He noted that the Fed normalizing rates is not aimed at restraining the economy. Later today we will hear from Fed Chair Powell, Bullard, Evans, Kashkari and Clarida. Kashkari, is a dove and a non-voters this year.