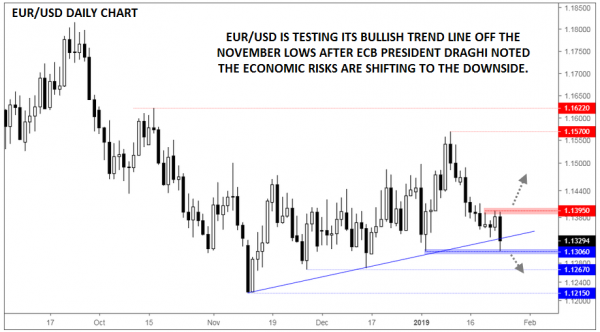 As unanimously expected, including by my colleague Fawad Razaqzada, the European Central Bank made no changes to monetary policy in today’s meeting. In its statement, the institution reiterated that it would leave interest rates unchanged through at least this summer, or as long as needed for inflation to converge toward the central bank’s target. Of course, this “decision” was widely discounted by markets, so it was Mario Draghi’s press conference that traders were focused on.

In his comments, the ECB President noted that the risks to the economic outlook have “moved to the downside” (a downgrade from “the balance of risks is moving to the downside” at his last meeting). Dr. Draghi blamed the deteriorating economic deterioration on “the persistence of uncertainties related to geopolitical factors and the threat of protectionism, vulnerabilities in emerging markets and financial market volatility.”

As other analysts have noted, this is the first time he’s downgraded the central bank’s assessment of economic risks in a meeting where the central bank did not issue new economic forecasts, suggesting that the Eurozone’s economic outlook may be particularly tenuous. If incoming data fails to improve soon, the central bank will probably look to push out its forecast for the first interest rate toward Q4 or even into 2020.

Despite these dovish comments, Draghi appeared reluctant to endorse another round of TLTROs or LTROs to stimulate bank lending. Super Mario’s caution on this front, along with a round of US dollar weakness on Commerce Secretary Ross’s proclamation that the US and China remain “miles and miles” apart in trade negotiations, has kept EUR/USD above its bullish trend line for now.

With economic expectations for the region subdued and rates testing a key support confluence, we wouldn’t be surprised to see a short-term bounce back toward the 1.14 area in the coming days. That said, a break below the year-to-date low at 1.1306 would signal that bears have regained the upper hand and open the door for a move down toward previous support at 1.1270 or 1.1215 next.