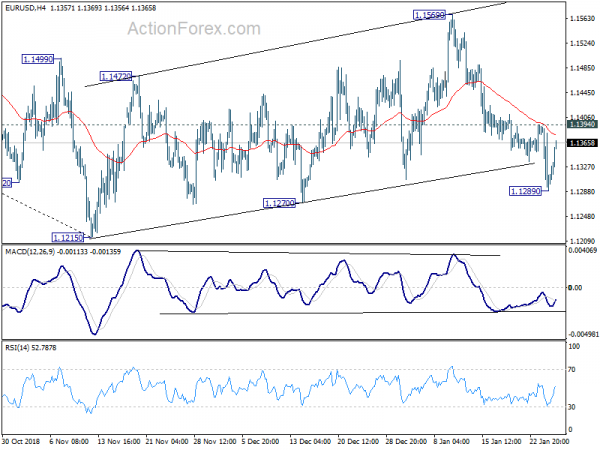 Yen traders broadly lower today as risk appetite extends from Asia markets to Europe and then US. Dollar is following as the second weakest and then Swiss Franc. Meanwhile, New Zealand, Australian and Canadian Dollars are the strongest one. The development is pretty normal on a “risk-on” day. Sterling turns mixed as Brexit optimism rally lost momentum as the pound is pressing key resistance against Dollar and Euro. Euro also turned mixed as impact from yesterday’s ECB meeting fades.

Technically, GBP/USD and EUR/GBP will be key focus today, and probably early next week too. GBP/USD is pressing 1.3174, which is close to 1.3149 fibonacci level. EUR/GBP is pressing 0.8620 key support too. For now, we’d still expect the Pound to pull back from the current level but we’ll see. Another development to note is the turn in Dollar. Most notably, AUD/USD seems to have completed the pull back from 0.7235 earlier than expected. USD/CAD’s recovery from 1.3180 might have completed yesterday too. Meanwhile, EUR/USD is having an eye on 1.1341 resistance and break will indicate short term bottoming.

Bloomberg reported that a Chinese deputy ministerial delegation is traveling to Washington on Monday to start preparation for the meeting between Vice Premier Liu He and US Trade Representative Robert Lighthizer on January 30-31. The delegation include Vice Commerce Minister Wang Shouwen and Vice Finance Minister Liao Min. PBoC Governor Yi Gang will join the meetings too.

Ifo President Clemens Fuest noted “disquiet is growing among German businesses”, and “the German economy is experiencing a downturn.”

ECB Governing Council member Villeroy de Galhau said today that “We remain committed to maintaining interest rates very low, which is good for the economy:” And, “Progressively we are withdrawing monetary stimulus… but it is very progressive and depends on improvement in the economy. We’ll take the time it takes.”

Villeroy also noted that uncertainties are the main reason for the slow down in the economy. That also echoed ECB President Mario Draghi’s comment. The economic projections to be released during March ECB meeting will be watched closely. And, Villeroy hinted that there may be downgrade in GDP forecasts.

UK Chancellor of the Exchequer Philip Hammond repeated his usual warnings today that in case of no-deal Brexit, “there will be very significant disruption in the short term and a very significant hit to our economy in the medium to long term.” And, he pledged that “our job is deliver the British people what they believe they were promised in that referendum. To make sure we respect the decision of the referendum but do it in a way that gives them the future prosperity they were promised.”

Hammond refused to say if he would step down in no-deal Brexit. He just said “I’m not going to speculate because a lot depends on the circumstances, what happens. The responsibility I have is to manage the economy in what is in the best interests of the British people. Now I clearly do not believe that making a choice to leave without a deal would be a responsible thing to do.”

Northern Ireland DUP: Trap of the Irish backstop is the problem

After rumors that Northern Ireland DUP has privately given conditional agreement to UK Prime Minister Theresa May’s Brexit deal, its deputy leader Nigel Dodds echoed that support. Dodds said “We want to reach a consensus which respects the constitutional and economic integrity of the United Kingdom and which also works for our neighbours in the Republic of Ireland”. And, “the trap of the backstop is the problem,” he added. “There are ways forward which do not require this backstop and we need to see a willingness to explore such options.”

Meanwhile EU and Ireland are stepping up preparations for no-deal Brexit. European Commission spokesman Margaritis Schinas confirmed that Commission President Jean-Claude Juncker and Irish Prime Minister Leo Varadkar had spoken yesterday. And, they had “looked forward to continuing close cooperation … including on intensifying no deal contingency action in the coming weeks”.