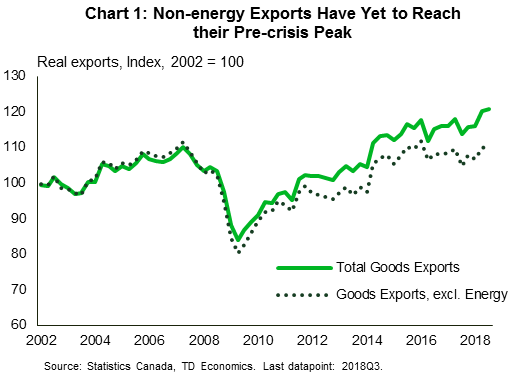 Canada continues to face headwinds both domestic and international, but has at the same time enjoyed some ‘wins’ of late when it comes to international trade agreements. The Canada U.S. Mexico Agreement (CUSMA) may not be a game changer, and US politics suggests it may take some time before it comes into effect. But its expected ratification nevertheless provides some much needed certainty to Canadian exporters. Perhaps lost in the CUSMA hubbub was the one year anniversary this past September of the Comprehensive Economic and Trade Agreement (CETA) taking provisional effect, opening up trade with one of the world’s largest economic blocs. And the Comprehensive and Progressive Agreement for Trans-Pacific Partnership (CP-TPP) recently came into effect with six of eleven signatories ratifying the deal. The benefits of new trade arrangements typically take time to bear fruit. So far, there has been an encouraging uptrend in exports to countries other than the U.S., although the importance of the U.S. means we’ve seen little overall progress when it comes to non-energy exports; trade volumes remain below pre-crisis peaks (Chart 1).

Regarding the near-term export outlook, all eyes remain on the US and China, who remain at loggerheads over their trading relationship. President Trump has repeatedly threatened to impose tariffs on the full spectrum of U.S. imports from China (currently, roughly US$200 billion of trade is subject to tariffs). As of writing, the ‘deadline’ for an agreement before additional tariffs are imposed is March 1st, 2019, which doesn’t leave a lot of runway for negotiations. There has been some reported progress in negotiations with the next round of discussions slated for January 30th. But if the talks ultimately go sideways and the US follows through with more tariff hikes, China would undoubtedly respond through increased tariff and non-tariff trade barriers.

With this sword hanging over the global economy, we have been asked what the implications of such an outcome would be for Canada. Clearly, Canadian exports in general would feel significant knock-on effects if a worsening trade war further hit global trade and financial market sentiment. Still, another question emerges: could Canadian exporters reap some benefits from falling demand in the US (China) market from more expensive Chinese (US) goods?

This analysis suggests that the answer to this question is no or limited at best. First, Canadian trade flows and production patterns have evolved along markedly different lines than those in both the US and China, suggesting little in the way of product substitutes. Canadian firms have lost significant U.S. market share in the categories that China dominates. In China, outside of energy products, the same story holds true. Second, Canadian manufacturing has undergone a prolonged period of adjustment, with capital stock and employment significantly below pre-crisis averages. This leaves firms operating at or near capacity with little room to expand output quickly (Chart 2). This lack of ‘spin-up’ capacity, is likely related to China’s ascent in U.S. imports, sapping Canadian market share (Chart 3). Finally, although service exports have been and should continue to be a higher growth area for the Canadian economy, there is little reason to expect acceleration. In contrast to goods, China’s market penetration has been more modest, limited the upside, and Canadian firms will continue to face off with those in low cost jurisdictions such as India, which has rapidly gained market share in recent years. In this vein, with few offsetting benefits in store a further escalation in the trade war between the US and Canada only represents downside to Canada’s economy.

On a happier note, we still see a good possibility that further tariff hikes will be avoided, and the latest TD Economics forecast still seeing a solid path for exports on the back of continued US expansion. The takeaway from this report is not to emphasize the downside risks, but rather the lack of upsides.

Canada not always a substitute

At least so far, despite the imposition of US tariffs on Chinese goods, the opportunities for Canadian export substitution within the US market have proven limited. This is because the tariffs already implemented have occurred alongside a devaluation of the Chinese currency, thus preserving Chinese price competitiveness. Thus, Canada’s potential to fill any export gap that is created going forward will depend in large part by the future direction of the renminbi.1

In any event, a look into the rear view mirror both underscores the potential opportunities that could be created due to China’s large and rising presence over time in the U.S. marketplace but also underscores the challenges that Canadian exporters might