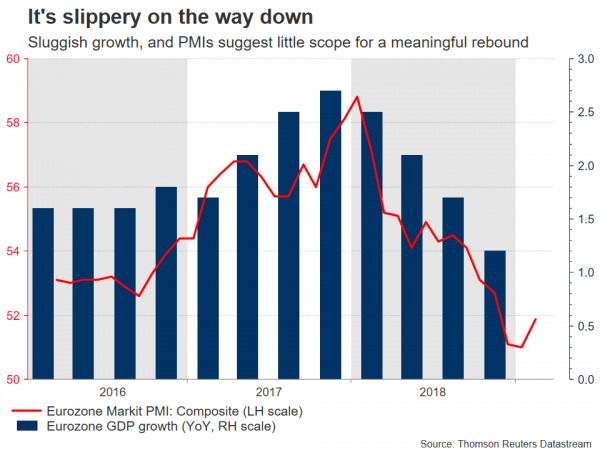 The European Central Bank (ECB) will conclude its policy meeting on Thursday at 12:45 GMT, with a press conference by President Draghi to follow at 13:30 GMT. The Eurozone economy is struggling, and market attention will thus be on whether the ECB will take steps to cushion the slowdown, for example by hinting at another round of long-term loans for commercial banks. While such signals may hurt the euro a little, for euro/dollar to break below 1.1213, some greater catalyst may be needed.

The past few quarters have been a rough period for the euro area. Economic growth has slowed dramatically, and considering that forward-looking surveys such as the PMIs remain in the doldrums, any meaningful rebound seems unlikely in the near term. Meanwhile, underlying inflation remains subdued, with the recent acceleration in wages not having translated into higher prices, so far at least. There’s also an array of external risks, most notably the slowdown in China and elsewhere, as well as the hanging threat that the US could impose tariffs on European car exports soon.


Admittedly, there are very few bright spots in the economy beyond the labor market, and the ECB finally started to admit as much at its latest meeting, when it downgraded its assessment of risks around growth. Alas, policymakers seemed reluctant to signal any potential measures to cushion the economy back then, preferring to postpone any decisions for a later gathering that would be accompanied by updated economic forecasts, which is now.

To make a long story short, this meeting will be about what steps the ECB is willing to take to support the bloc’s weakening economy, if any. Assuming that economic forecasts are revised down, which is highly likely, it would only make sense for the ECB to be proactive and signal it’s considering some action. A change in the rate guidance – for instance pushing back the expected timing of the first rate increase – seems quite unlikely for now, as the situation isn’t dire enough yet to warrant such a significant pivot. A more practical and conservative option would be launching another round of cheap long-term loans for commercial banks, the so-called TLTROs.

At the last meeting, Draghi said there would need to be a clear monetary policy reason to launch another liquidity operation, though in truth, if this slowdown isn’t enough of a reason then it’s unclear what is. While the ECB probably won’t go as far as actually announce new TLTROs on Thursday, it could send an explicit signal that it is seriously considering the option, for example by assigning the relevant committees to evaluate such a plan – effectively using this meeting as a stepping stone for a formal announcement later on. The alternative is to “stay the course” and simply do nothing for now, in order to buy some more time to examine incoming data.

In the FX market, an explicit signal for TLTROs would likely be negative for the euro, at least on the news. A taste of this was provided recently by the ECB’s Coeure, whose mere suggestion that officials are ‘discussing’ this option was enough to push the single currency lower. In such a case, support to declines in euro/dollar may be found near 1.1265, which was a low back in December. Even lower, attention would shift to the crucial November low, at 1.1213.

On the flipside, if the ECB refrains from announcing anything at all, that would probably be taken as a hawkish sign and could therefore boost the euro, especially considering that some expectations for another TLTRO round are probably baked into the single currency already. In this scenario, initial resistance to advances in euro/dollar may be found near the 50- and 100-day simple moving averages (SMAs), both of which are around 1.1380. An upside break could open the way for a test of 1.1420.

In the big picture, euro/dollar remains well supported from narrower interest rate differentials between the EU and the US. This implies that sellers may have a difficult time piercing below the November lows at 1.1213 and may require a strong catalyst for such a break – probably something bigger than a TLTRO announcement. That being said, until there is meaningful recovery in the Eurozone’s economic data pulse, any major rebound in the pair – for example above 1.1500 – seems equally unlikely.