Currency Pair of the Week: USD/JPY 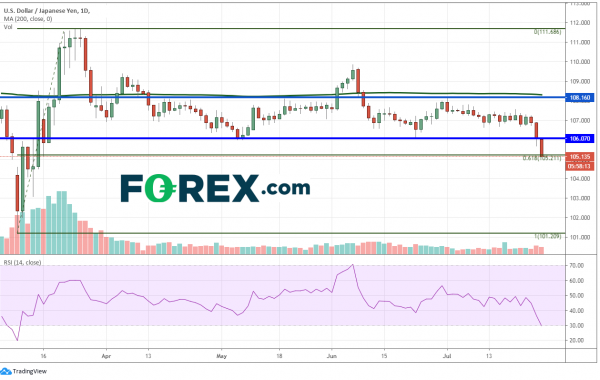 Its been a while since we have discussed USD/JPY, and for good reason. With the arrival of the coronavirus pandemic back in March,  USD/JPY has been neutralized by central banks as the US has brought interest rates to zero and began another round of quantitative easing.

Since the collapse of the Japanese stock market in 1991, the pair has traditionally been a sign or risk-on/risk-off and moved in tandem with the stock market.  Stagflation ruled the next 10 years, often referred to “The Lost Decade”.  The Bank of Japan (BoJ) began its own quantitative easing policy and hasn’t looked back since!  First, they bought JGBs, and later they bought ETFs.  With the BoJ backing the Yen, it became a flight to safety.  It got to a point where Japanese economic data didn’t even matter any more because they BoJ was in control.  However, US data DID matter.  USD/JPY and the S&P 500 moved in tandem.  So, if a bad US economic data point was released, stocks would move lower and the Yen would strengthen immediately in the flight to safety trade.

Fast forward to today.  As the Fed has adopted many of the same policies as the BoJ, more specifically buying bonds and ETFs with interest rates at zero, market information has had less effect on USD/JPY.  With the FOMC meeting this week, traders will be watching to see if the Fed becomes more dovish because of the increase in coronavirus cases in the US or because of US-China relations.  If that is the case,  the US Dollar vs the Japanese Yen could move even lower (as we have seen with the DXY over the last few weeks). On a 240- minute timeframe, USD/JPY has been melting lower since July 23rd after trading a month below 107.50.  The RSI is currently in oversold levels, however, the indicator is putting in it a higher low.  If USD/JPY cannot close below 105.20, it may be due for a reversal. The FOMC Statement could be a big mover for USD/JPY this week.  If they are more dovish, watch for the pair to move lower.  In addition, a close below the 61.8% Fibonacci retracement level near 105.20 could also send it lower.