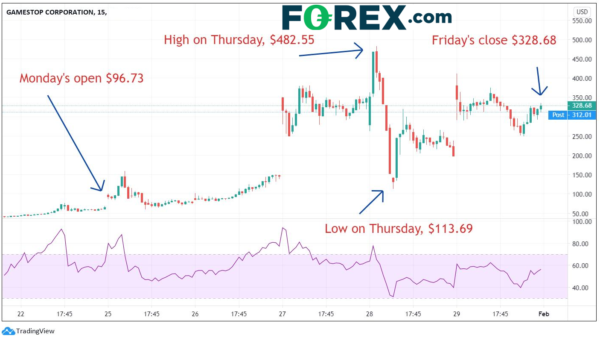 What a week!  It’s hard to look ahead when most are still trying to understand what happened to GME and other high-flying individual stock names last week.  Can it continue?  Although everyone was caught up in the “Robinhood” and “short-squeeze” news, it was the South African coronavirus variant that may have spooked the markets on Friday.  Watch for news over the weekend as to if the more contagious, but less lethal, variant is spreading rapidly.  Last week we heard from the FOMC, and this week, we have RBA and BOE meetings.  Is the BOE ready to dive into negative rate territory?  In addition, with TSLA missing expectations last week, GOOG, AMZN, and BABA will be in focus on Tuesday. This week also brings the usual beginning of month economic data, including US NFP and the Canadian employment.

Gamestop, symbol GME.  Have you heard of it? By now you most likely have and if you were short the stock you weren’t happy.  Allegedly, retail traders gathered in a chatroom and decided that the short position in GME was large enough that if they began buying the stock and could move it higher, these large shorts would be forced to close out their positions at higher prices, resulting in heavy losses.  Apparently, this is what happened and GME.  The price of GME opened that year at $19.00.  The price opened this week at $96.73.  The high is week was $483.00.  (These prices do not include the overnight markets, which traded even higher.)  A short squeeze appeared to be in full effect.

However, GME wasn’t the only stock targeted for a short squeeze.  AMC, EXPR, BB, BBBY, SLV, and KOSS, among others,  also appeared to be driven higher by a short squeeze.  Many retail traders had accounts on the popular Robinhood app.  However, when the small retail broker was forced to draw on its lines of credit, it began blocking traders’ access to trade these volatile stocks and closing traders’ positions to mitigate risk.  Robinhood is safe for now, however restrictions have been places on many of the volatile stocks.

Watch this week to see if there are continued short squeezes on other stocks and ETFs, and what affect it could have on the overall markets.

They coronavirus continued to plague the world last week.  UK’s Boris Johnson said that he hopes that it will be safe to reopen schools on MARCH 8th, as the country remains in lockdown.  France has closed borders to all non-European countries. In the US, President Biden said that Congress needs to act NOW on the $1.9 trillion economic stimulus plan he has proposed, as over 433,000 Americans have been killed.  Variants of the coronavirus have been springing up around the world, most notably in the UK…until now.  Clinical trials of the vaccine vs the South African variant of the coronavirus by Novavix Inc are said to not protect participants who already had the coronavirus.  Johnson and Johnson’s result are said to be similar.  And on Friday, Pfizer’s CEO said that there is a high probability that future variants will elude vaccines.  The new strain has been found in 31 countries, including the US. This could hamper efforts towards getting enough people vaccinated to create herd immunity!  Traders will need to watch this week to see if the variants continue to spread, and at what pace.  A slowdown towards herd immunity could be problematic for the economy in Q1.

Last week provided little new information by the FOMC. They noted that unemployment had moderated and that their outlook was not only dependent on the path of the coronavirus, but now also the rollout of the vaccine.   However, it was an ECB comment that made the headlines, noting the markets were underestimating the odds of a rate cut.  Could more stimulus be on the way?  This week brings interest rate decision meetings from the RBA and the BOE.  The RBA is most likely on hold, while noting that recent economic data has been better.  The BOE may increase their asset purchases, however now that Brexit is done, they will most likely be in “wait and see” mode as they wait on economic data from the effects of the lockdowns.  Last week, BOE Governor Baily said that no decision has been made on negative rates.

The beginning of February brings the beginning of month data, which includes Final PMIs and employment data from the US, Canada, and New Zealand.  Recall that last month, the US posted a loss of 140,000 jobs vs a rise of 71,000 expected.  This month, economists are only expecting 20,000 to be added to the economy.  Traders will be watching to see if they miss the spot again. Charts are picked as the Chart of the Week for various reasons.  Most of the time, it is to show chart patterns combined with extremes in oscillators, which may be indications of a change in trend ahead.  This week, GME was chosen to show to the dangers of getting caught in a short squeeze.  The 15-minute GME chart show’s last Monday’s open at $96.73.  On Thursday, price gapped higher and opened at $349.22 (up 117%).  Price made an intraday high on Thursday at $482.55 and an intraday low at $113.69. On Friday, price gapped higher again (up 75%) and finally closed at week at $325.  If one was short the stock heading into Wednesday or Friday, he or she would probably have been severely wounded, monetarily.  Short squeezes are often violent and stops may not get filled until the open if the squeeze is done overnight.  As this seems to have been the fad this past week, watch for it to continue.  Again, note our article on a short squeeze to learn more.

Watch this week for news on coronavirus variants, especially the South African variant,  and vaccine rollouts.  In addition, watch for guidance from both the RBA and the BOE.  Big name earnings data and employment data could also play a role in market volatility.