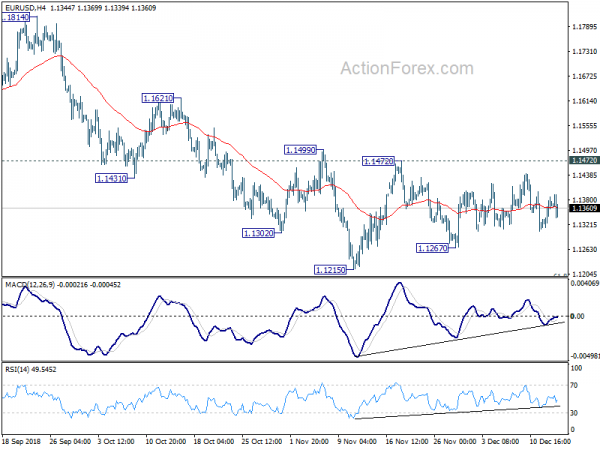 It’s a relatively calm day today despite all the high profile events. At the time of writing, Euro is trading as the weakest one after ECB delivered a dovish shift as expected. In short, 2019 growth and inflation forecasts are lowered, and Draghi said balance of risks are moving to the downside. But it will take more time to see if Euro is really reversing for the near term. Swiss Franc trades mixed after SNB retained negative interest rate policy and pledged to stay active in intervention. Sterling is the strongest one so far. After winning yesterday’s leadership challenger, UK PM May is now in Brussels, with no expectation of a breakthrough though.

Technically, EUR/USD, EUR/JPY, EUR/GBP, EUR/AUD are staying in familiar range despite today’s up and downs. EUR/GBP and EUR/AUD are bullish with 0.8931 and 1.5596 support intact. But EUR/USD and EUR/JPY are near term bearish with 1.1472 and 130.14 resistance intact. Meanwhile, GBP/USD is staying well below 1.2811 resistance and keeps bearish outlook. But GBP/JPY could have a taken on 144.02 resistance as early indication of bullish reversal.

ECB let interest rates unchanged today as widely expected. That is, main refinancing rate, marginal lending facility and deposit facility rates are held at 0.00%, 0.25% and -0.40% respectively. ECB maintained forward guidance that interest rates will “remain at their present levels at least through the summer of 2019”. Also, the asset purchase program will end this month as scheduled.

In the post meeting press conference, ECB President Mario Draghi said the assessment of risks was a focal point in the discussion during the meeting. And he’d summarize the discussions with “continuing confidence with increasing caution”.

SNB also noted that Swiss Franc is “still highly valued, and the situation on the foreign exchange market continues to be fragile.” Negative interest rate and the willingness to intervene “remains essential”. Theses measures “keep the attractiveness of Swiss franc investments low and reduce upward pressure on the currency.

Slow down in Q3 is seen as temporary by SNB. And it anticipates “solid growth in the coming quarters”. For the near term, world economy will continue to expand “somewhat above potential”. But “gradual slowdown is likely in the medium term”. SNB pointed out some significant risks including “political uncertainties and protectionist tendencies” For 2018, growth is projected to be at 2.5%, slightly revised down. For 2019, growth is projected to slow to 1.5%

In the report, Ifo said downside risks for global economy “grew markedly” compared to autumn. US has imposed customs duties on a “large number of imports”, followed by retaliation from China and the EU. And “it is impossible to predict the direction that the trade dispute will take”. In case of escalation, Ifo warned “global trade in goods and overall economic production can be expected to suffer a major setback.”

Also, trade dispute will lead to faster rise in inflation. And if advanced economies central banks opt for “far more restrictive measures”, this may prompt a “return to capital outflows from emerging markets.” Hard Brexit “represents another risk for the economy both in Britain and in the euro area.” Besides, high risk premium on Italian government bonds also pose a threat to economic development in the Eurozone.

EU reiterates no Brexit negotiation, May seeks legal and political assurances on the backstop

European Union Budget Commissioner Guenther Oettinger reiterated the commission’s stance on Brexit negotiation. That is, ” final clarification yes, but further negotiations no”. Oettinger went further and emphasized that there won’t be a time limit for the backstop solution on Irish border. He added “that doesn’t work. We need to have clear rules for people, products and goods at the border of Ireland, Northern Ireland, Belfast and Dublin.”

Separately, it’s reported the EU is ready to provide further assurance regarding the backstop. Reuters reported after seeing a six-point document for today’s summit. The assurance would include that “The European Council underlines that the backstop does not represent a desirable outcome for the Union. The backstop is only intended as an insurance policy … It is the Union’s firm determination to work speedily on a subsequent agreement.”

And even if triggered EU would say the backstop would “apply only temporarily unless and until it is superseded by a subsequent agreement.” EU would also commit to “best endeavours” to agree on a new EU-UK deal if the backstop is triggered “so that it would only be in place for a short period and only as long as strictly necessary.”

UK Prime Minister Theresa May survived the leadership challenge yesterday. She’s now in Brussels for the EU summit. She told reporters that “I don’t expect an immediate breakthrough, but what I do hope is that we can start to work as quickly as possible on the assurances that are necessary.” And those include both legal and political assurances on the backstop.

Also, May confirmed that she will not lead the Conservatives into 2022 election. Read more forex news…

Conte emphasized that “We are not betraying the trust of Italians and we respect the commitments made with the measures which have the most impact.” He added that “growth will be above our expectations” and the structural deficit will fall. Economy Minister Giovanni Tria will travel to Brussels today to guide the remaining parts of the budget talks with EU.

US initial claims dropped to 206k vs expectation 227k

No change in EUR/USD’s outlook as it’s bounded in consolidation in range of 1.1267/1472. Intraday bias remains neutral for the moment. On the downside, break of 1.1267 will target 1.1215 low first. Firm break there will resume larger down trend from 1.2555 for 1.1186 fibonacci level next. However, considering bullish convergence condition in daily MACD, firm break of 1.1472 will be suggest medium term bottoming and turn outlook bullish for 1.1814 resistance instead.