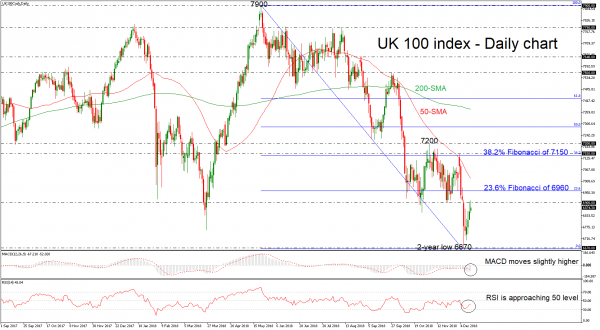 UK 100 stock index (FTSE 100) has rebounded somewhat after falling to two-year low of 6670 on December 6 and momentum indicators now suggest that the market sentiment might get better as the RSI is moving higher in the negative territory. The MACD also looks to be changing direction, moving higher to meet its red trigger line in the negative zone.

If the price manages to continue bullish actions and surpass 6900, the 23.6% Fibonacci retracement level of the downleg from 7900 to 6670, around 6960 could come in focus. Further up the index could rest around the 38.2% Fibonacci near 7150 as it did in early December, while a violation of this point may shift attention towards the 7200 resistance.

However, should bearish dynamics dominate, the market might revisit the two-year trough of 6670. Below that, the area around 6520, identified by the low on November 2016, could be another potential barrier for traders. (for extra money in the currency market use our forex robot)

Overall, the downfall from 7900 is still active and hence the outlook remains negative. The 50-day simple moving average (SMA) has further increased distance below the 200-day SMA, hinting that the downward pattern might hold for longer.