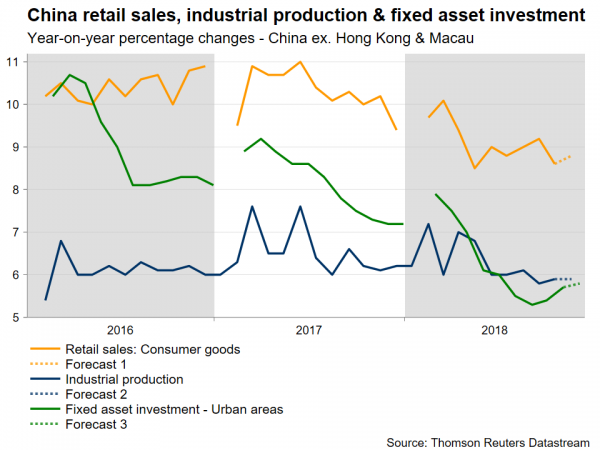 China’s latest industrial production, retail sales, and fixed asset investment figures will hit the markets early on Friday, at 0200 GMT. Forecasts point to an acceleration in the latter two, which may alleviate some worries around a slowdown in economic growth, and potentially help the yuan and the “China-sensitive” aussie to recover some ground. In the bigger picture, the most crucial variable for both currencies may be how US-China trade talks evolve.

The Chinese economy has slowed somewhat in recent quarters, generating concerns that the trade standoff with the US is already impacting growth; worries that Chinese authorities sought to address by announcing plans to ease both monetary and fiscal policy. Hence, investors will be monitoring incoming economic data closely, for signs of whether this pattern is continuing, or abating.

In November, the nation’s retail sales are forecast to have accelerated to 8.8% in yearly terms, from 8.6% previously. Likewise, fixed asset investment is projected to have risen by 5.8%, after clocking in at 5.7% in October. Meanwhile, industrial production is anticipated to have grown at 5.9%, the same pace as previously. (for extra money in the currency market use our forex robot)

An overall strong set of prints could calm some concerns around a further slowdown in Chinese growth, and thereby help the yuan – as well as the Australian dollar – to recover some poise. The aussie is usually viewed as a liquid proxy for “China plays”, given the close trading relationship between the two economies. Speculators often favor it over the yuan, as shorting the Chinese currency for instance implies taking on the added risk of being caught on the wrong side of policy intervention by the nation’s authorities.

Beyond economic data, the other – and likely more important – determinant for these two currencies will be how trade talks between the US and China play out. Despite encouraging signals lately suggesting China is considering to open its economy further to foreign firms, it’s probably too early to confidently say that these negotiations will indeed bear fruit. It remains to be seen whether any concessions China makes, particularly on forced technology transfer and intellectual property protection, will be enough to appease the US administration.

Looking at aussie/dollar technically, immediate resistance to advances may be found near the 0.7280, marked by the inside swing low on November 30. Even steeper bullish extensions could aim for the 0.7345 zone – defined by the November 29 peak. On the flipside, initial support to declines could come around the December 10 low at 0.7165, before the inside swing high of October 29 at 0.7110 comes into view.